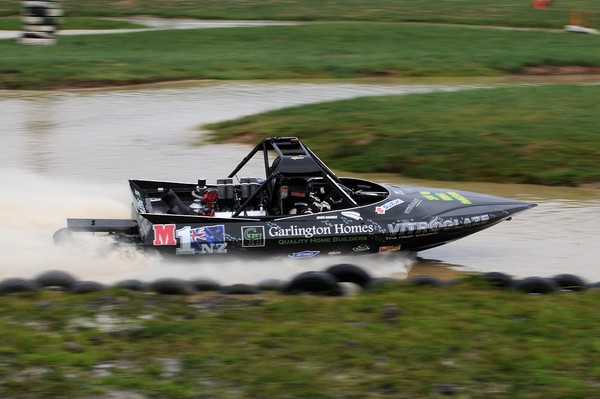 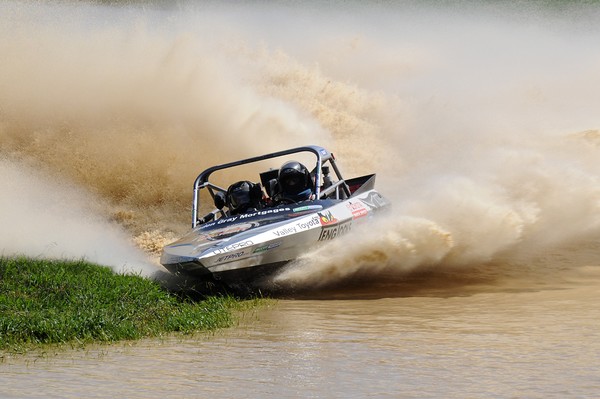 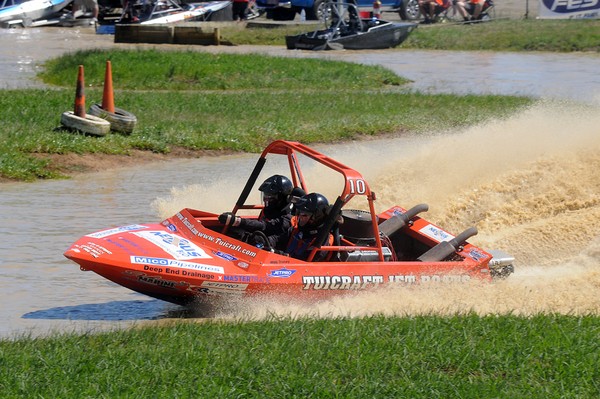 Palmerston North’s Richard Burt and navigator Roger Maunder swept all before them in today’s third round of the 2010 Jetpro Jetsprint championship round held at Meremere.

Driving the #1NZ Vitroglaze Garlington Homes entry to the Suzuki super boat category, Burt was over three seconds faster than any of the other 30 teams across the three classes competing for title honours around the water course.

A large crowd by competitor standards, the perfect summer weather didn’t always match Burt’s performance – having the biggest moment of the day when he clipped an earth filled tyre during one of the morning qualifying runs.

“I just threw it too tight in to a hair-pin and clipped it, the boat sat upright, we went sideways and luckily it didn’t roll over,” said a relieved Burt having just taken the day’s win, reclaiming the lead for his class title defence.

“In the three years we’ve had this boat we haven’t dented it, but today it got christened.”

Setting a best time of 53.40 seconds around the track notorious for accidents, Burt’s time in the final run was a 53.66 - over three seconds faster than Wanganui’s Pat Dillon and Steve Edmonds Ford 410 powered boat in second.

“We’ve finally got the boat handling like its on rails,” continued Burt. “The boat has come in to its own.”

Auckland’s Baden Grey and navigator Tanya Iremonger have taken their third successive round victory of the season in the Scott Waterjet international Group A formula. Against defending series champion Bevin Muir and Kathy Barker who co-share the Teng Tools, Toyota Finance, Baden Gray Mortgages Chev powered boat; their fastest time of 56.91 was in the realm of the super boat competitors.

Victory in the Jetpro Lites class has seen Bulls pairing of David Stone and Steve Greaves take their second win of the season, breaking the title dead-lock with runner’s-up Ray Thompson and David Toms from Whangamata.

Now with a meagre one point lead, Stone says it was a case of first finishing the day.

“Our aim was to get top-four as that’s where the good points are and then whatever we get is a bonus. So to get top-two we were only ever one point away from the lead if we didn’t take the win,” he explained after posting a 62.80 second time for the final.

“We dotted the eyes and crossed the tees, did everything right,” spoke Stone of the fragile relationship against so many variable factors.

Having signalled raw pace in the second event of the six round series, Queenstown’s Chris Munro and navigator Brent Scammell missed the top-eight cut when they too had a similar bank catching moment to Burt during the eliminations.

Instead the chance of redemption comes with the series fourth round, to be held on a river-course style venue in the Hawke’s Bay on 14 March.

Editors note: Exact times and the subsequent championship points for many competitors outside the top-two are under evaluation and will be released when confirmed.