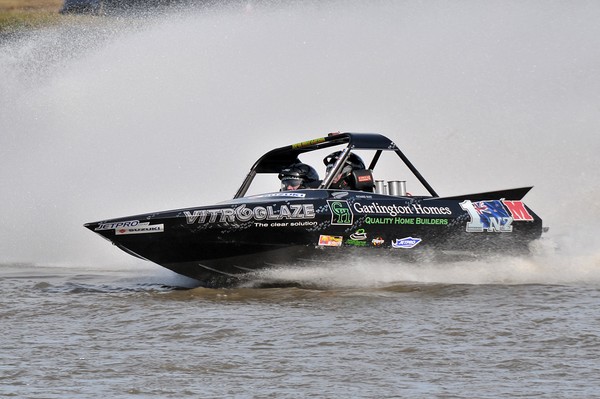 Palmerston North's Richard Burt and navigator Roger Maunder have extended their lead in the Suzuki superboat category after an emphatic victory in the weekend's fourth round of the Jetpro Jetsprint Championship being held near Hastings. CREDIT: Ian Thornton 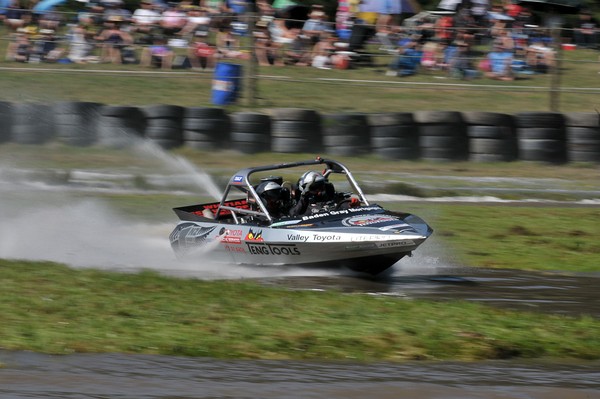 Defending Scott Waterjet Group A champions Bevin Muir and Kathy Barker of Thames took their first round win of the season at the Hawke's Bay round of the 2010 Jetpro Jetsprint Championship CREDIT: Ian Thornton 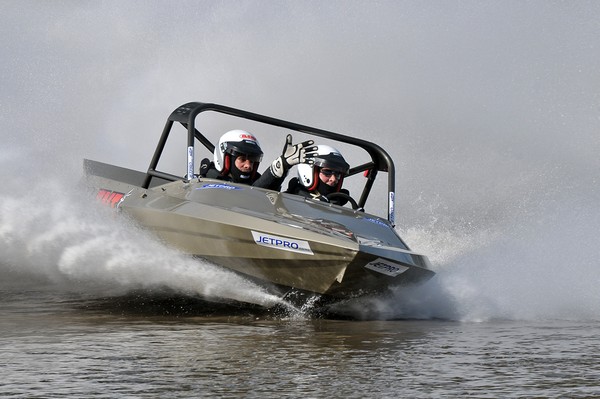 Defending Suzuki super boat champions Richard Burt and Roger Maunder swept aside all competition at the weekend’s fourth round of the 2010 Jetpro Jetsprint Championship, setting fastest time of the day at the Crownthorpe track in the Hawke’s Bay.

Extending their title lead, the Palmerston North pair had a scare after their 1000 horsepower boat left the water earlier in the day, creating the only off-track excursion of 31 teams competing at the lagoon venue west of Hastings.

Setting a time of 44.32 seconds in his final dash, Burt’s closest opposition was Waitotara farmer Duncan Wilson and navigator Jamie-Lee Lupton, who like Wanganui’s Leighton and Kellie Minnell, were eliminated in their final runs with engine failure.

“Thoroughly enjoying it,” said Burt of his third round win for the season. “It could have been a lot worse after our little moment earlier in the day, but an awesome day. Commiserations to Duncan Wilson and Leighton Minnell too, but looking forward to Wanganui and the night race.”

Joining Burt and Maunder on the victory dais under scorching skies, Whangamata’s Ray Thompson and David Toms took the Jetpro Lites round win, with Bevin Muir and Kathy Barker victors in the Scott Waterjet Group A category.

Thompson, with his second win of the season, has taken the series lead from defending champions Stone and Greaves: “I’m a very happy boy,” he exclaimed. “Commiserations to Dave Stone – they had been beating us all day, but over the moon to win here.”

With Bulls pairing of David Stone and navigator Steve Greaves eliminating themselves in the top-four run-off when they made a navigation error, it allowed Lower Hutt’s Bill Swan and navigator Paul Brigham to run for second.

Now with a two point lead in the standings, Thompson has two rounds to complete to secure his maiden title.

But the upset of the day was saved for the Scott Waterjet group A field with Taupo’s Reg and Julie Smith dominating the preliminary eliminations runs. However a battery change in the 1NZ boat shared by defending champion Bevin Muir and current points leader Baden Gray put the pair back at the front, shooting-out for the round win.

Thames based Muir and navigator Kathy Barker took the honours, pleased at taking maximum points in their quest at defending their title.

“My biggest worry at the moment is Reg (Smith),” said Muir who trails the veteran by a solitary point. I’m just trying to catch him, so as long as I’m ahead I’m happy.”

Meanwhile Auckland’s Baden Gray and navigator Tanya Iremonger were not fazed at having their winning streak broken.

“I’m really happy, but it’s all about championship points now and I’ve still got a good margin,” said Gray, who extends to a nine-point lead over Reg Smith.

With temperatures exceeding 30 degrees Celsius, the lack of a cooling breeze left crew and spectators seeking any shelter available. Although the largely family based crowd were treated to a lunch-time glimpse of the Go-Fast Granny who claimed one of the promotional ride opportunities. Betty Ferrier from Napier, the grandmother of seven, with eight great-grandchildren, has a list of speed activities she is out to accomplish before her time is up.

Riding with JetSprint Association president Andrew Guthrie in his Scott Waterjet Group A boat, she said it went a lot faster than she expected, but wished to do it again.

“I could do with another one,” she said after agreeing she’d had an adrenaline fix. “It felt fairly fast – it was neat.”

With four weeks until the penultimate round of the 2010 series, the next event returns to Wanganui’s Shelterview location, being held under lights on Saturday evening 10 April.