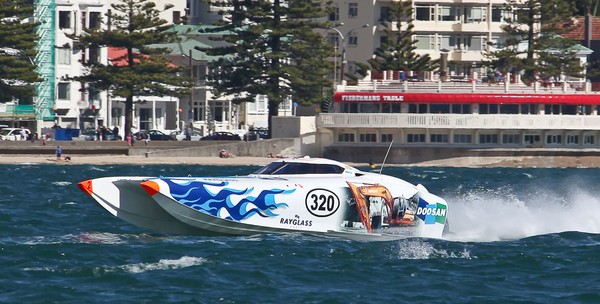 Wellington turned on a spectacular day for round 5 of the Rayglass New Zealand Offshore Powerboat Championship. Wellington is a very challenging place for the offshore powerboats, with a reputation for breaking boats. Saturday's conditions created a short, steep, confused sea that made the water hard to read.

Since the Napier round there has been a lot of off water action in the jury room, two teams unhappy with the race officers decisions took their cases to the full jury on appeal, the results from both Gulf Harbour and Napier were upheld and the appeals dismissed, clearing the way for some race action.

Today the talking was done on the water with Team Doosan winning by half a lap from Team 3 and one lap from Fairview Windows and Doors.

The race was full of action and some near disasters, with Fairview completing a 360 degree barrel roll on lap 3 to land the right way up. It was amazing that the crew managed to get the boat going and made a creditable 3rd place.

A1 Homes had a huge moment on lap 3 nearly capsizing the boat after hitting a ferry wake, the result was a broken propeller forcing them to run the balance of the race on one motor for a great 4th place.

The Superboat Lites were dominated by NZ Blokes with a fine win, closely followed by Rayglass, with Barracuda/Doosan 2 a lap back in third.

The 60 mile Racers also had great difficulty, the batboat of Mark Diggleman Cars wining from Espresso Engineers. Greg Brink from Konica Minolta did not finish as his boat sank in lap four.

Talking to Greg Brink of Konica Minolta after the race he said, “We were going along well and hit a bigger wave, causing the boat to submarine, seemed like we went down forever. We came up full of water and we bailed" (Got out -Ed)

The AB Marine Formula Honda’s provided the most action with close racing, and some spectacular jumps. They had a torrid time with the chop causing them to leap from the water and many of the boats and crew found it tough going.

California boats submarined while in the lead causing them to sink. Comments from Glen were “We were in front having fun when we got airborne and submarined on landing, we came up full of water but the engine was still going. We drove off but the bilge pumps couldn’t keep up with the water when we stopped by the rescue boat our boat rolled over “.

The winner of the hotly contested AB Marine Formula Honda race was Honda Marine, from Rayglass and Auckland District Collections in third.

Event details and results are posted on the NZOPA website, www.nzoffshore.co.nz.

The Rayglass NZ Offshore Powerboat Championship continues in Whitianga on 10th April, Marsden Cove, Whangarei on 24th April and ends on Auckland Harbour on 8th May.