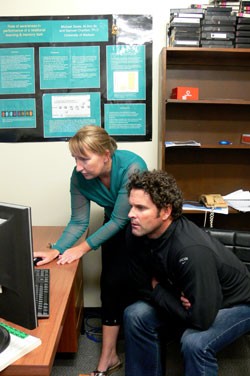 Off the Rails: Masters student Helen Clark gives cricketer and rail safety campaigner Chris Cairns a demonstration of her computer simulated experiment during his visit to discuss her research. CREDIT: University of Waikato

Cricketer and rail safety campaigner Chris Cairns was bowled for six by Waikato University masters student Helen Clark after meeting with her Wednesday March 24 to discuss her research on railway level crossings. Part of a wider Marsden funded vision science project, Clark’s research is looking at whether visual illusions might contribute to accidents on railway level crossings.

“This has great potential to assist with educating the public and raising awareness amongst our communities. I’m certainly encouraged by Helen’s research and how it can contribute and enhance the work we do,” said Cairns.

Established by Cairns after his sister Louise was killed in a level crossing accident in 1993, the Chris Cairns Foundation helps raise public awareness around rail safety and level crossings on New Zealand’s rail network.

“As an organisation, we look to this type of research and the benefits it has for New Zealand. If we consider the number of railway accidents we have here in this country, it’s important to support any progress which can lower these types of statistics.”

Led by Associate Professor John Perrone of the Traffic & Road Safety Research Group at the University of Waikato, the Marsden project is looking at the role of eye movements in people’s perception of the speed of moving objects such as trains. Clark, who graduated in 2009 with an honours degree in psychology, has spent the past 12 months researching for her masters.

“I had two types of experiments where we tested people’s reactions to computer simulations of an approaching train, motorcar and motorbike at crossings where there were no barriers,” Clark said.

“We looked at distance where participants indicated at what point they would not cross. We also designed a scenario where we tested people’s judgement between the speed of an approaching train and motorcar, and how those compared.”

The use of this computer simulation could be utilised as “an interactive education tool” in the future said Cairns, who was enthusiastic about its potential.

“We’re looking at innovative and creative ways to engage people in terms of raising awareness. I’d like to see some sort of interactive online tool that can help promote our messages. This idea of computer generated education tools is fantastic especially for children, particularly at primary school level.”