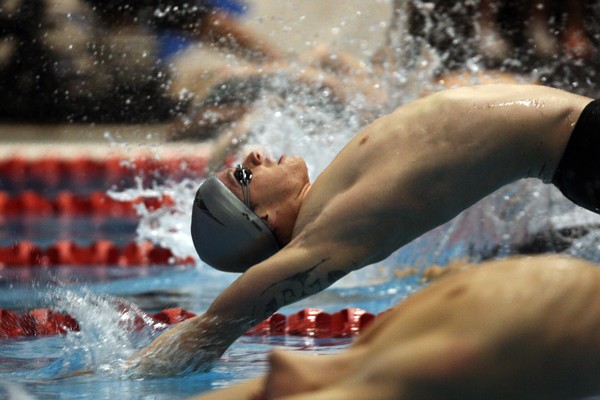 Beijing Olympian Daniel Bell wants to ring out a warning for his rivals after qualifying for the Commonwealth Games on the second night of finals in the State Insurance New Zealand Championship in Waitakere City tonight.

Bell, a 100m specialist, qualified in the 200m backstroke with an impressive display at the West Wave Aquatic Centre.

He clocked a personal best of 1:58.96 to go under the qualifying mark for the Commonwealth Games by half a second, bringing the qualifiers to four after two nights.

But for a fingertip it would have been six qualifiers with the North Shore pair of Emily Thomas and Glenn Snyders only fractions from the target times in the 100m backstroke and 200m breaststroke respectively.

Thomas, the former Gisborne swimmer, led a North Shore charge in the woAmen’s 100m backstroke to win in 1:01.51, which was only 2/10ths of a second off the qualifying time for New Delhi.

It was even closer for Snyders who was the class of the field in winning the men’s 200m breaststroke in 2:13.55 which was only 13/100ths of a second off the qualifying mark, although he has his specialist 100m event tomorrow.

Bell led from the start but was pushed all the way by former national record holder Gareth Kean (Capital) with the pair going through the midway mark in 57 seconds with Bell just 4/10ths of a second off Kurt Bassett’s New Zealand record.

“I am really happy with that. The 200 is not my main race so to get a qualifying time in that relieves a lot of pressure for the 100. I am now looking forward and upwards,” Bell said.

“I will go back and look at the splits but obviously it’s the fastest time that I’ve done before and it’s been two years since I have some this event seriously. I’ve only been training for this for five months so I am really pleased.

“It’s a real confidence boost leading up to the Commonwealth Games. All of the top backstrokers in the world are now swimming the 200m. It helps with some back end endurance for the 100m.

“Hopefully now I can produce a top time in the 100m and give some of the top backstrokers in the world a bit of a fright.”

Snyders, a specialist 100m breaststroker, was a semifinalist in the 200m in Beijing. He looked on track just under the schedule at the 150m mark but faded a fraction coming home to clock 2:13.55.

“I will take some confidence into the 100m tomorrow with this but it’s also disappointing,” Snyders said. “I was where I wanted to be but should have been able to bring it home. And I should have glided at the end instead of taking that extra stroke which cost me.”

Thomas led out well in the women’s 100m backstroke to be the only swimmer under the 30 second barrier through 50m, withholding the storming finish from Olympian Melissa Ingram in 1:01.51 with North Shore swimmers filling the first four places.

The 19 year old had already gone under the target time in Australia and is the national record holder.

Hayley Palmer (North Shore) gave her campaign for selection to New Delhi a boost when she broke the national record in the 50m freestyle.

The 20 year old, 11th in the world championships last year over 100m, stormed home in the one length dash in25.36s to go under Toni Jeffs’ eight-year-old record by 7/100th of a second.

North Shore’s Carl O’Donnell stole a march on the field to win the men’s 100m freestyle from the outside lane in 50.56, ;leading throughout to edge out clubmate Andrew McMillan and Roskill’s William Benson in a personal best.

The championships continue until Friday.