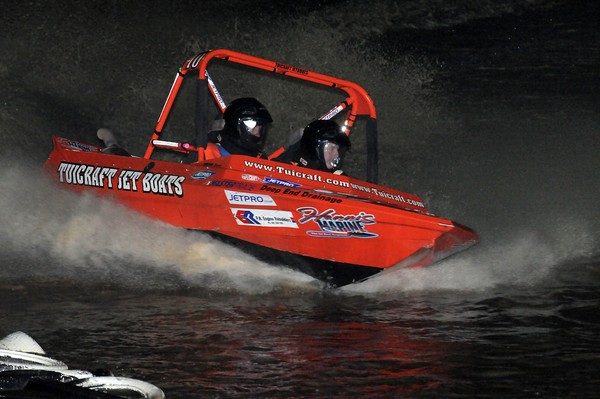 Returning to the lead in the Jetpro Lites championship category, defending champions David Stone and Steve Greaves of Bulls took a comfortable win under lights at the penultimate season round held near Wanganui on Saturday night. CREDIT: Ian Thornton

Auckland's Baden Gray and Tanya Iremonger had an anxious wait to be confirmed winners of the Jetpro Jetsprint championship round held under lights, taking his fourth win for the season in the Scott Waterjet Group A class. CREDIT: Ian Thornton 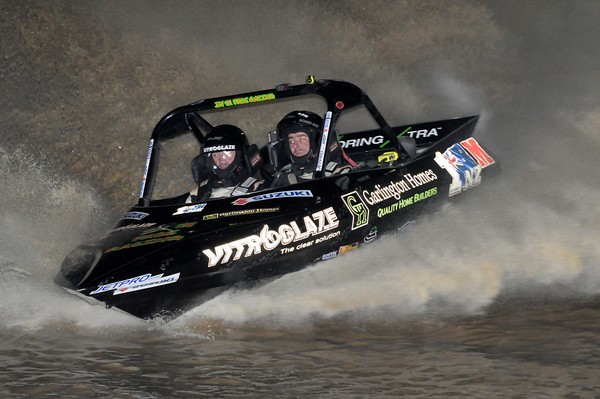 Palmerston North's Richard Burt and navigator Roger Maunder had a lucky rise from the ashes of a fire during the night racing at Wanganui to set fastest overall time for the fifth round of the Jetpro Jetsprint championship series on Saturday night CREDIT: Ian Thornton

Saturday night’s penultimate round of the 2010 Jetpro Jetsprint Championship was filled with action for the excited crowd watching the night racing at Wanganui’s Shelterview track.

Aside from V8 powered boats leaving the water around the illuminated venue, spectacular fire scenes added to the charged atmosphere enjoyed by the largely family oriented crowd. Won overall by Palmerston North’s Richard Burt and navigator Roger Maunder in the Suzuki super boat, it was a return to winning ways by Scott Waterjet Group A team of Baden Gray and navigator Tanya Iremonger, while David Stone and Steve Greaves reclaimed the lead in the Jetpro Lites category.

While the early-evening qualifying runs ran without incident, as night took hold and the lights were turned on for the first night-time championship round, fortunes changed.

First to leave the course marked by white painted tyres around the grass-green water course, Queenstown’s Chris Munro and Brent Scammell had to have his Suzuki super boat extracted from the fence. Then, in the very next run, Wanganui’s Pat Dillon and navigator Steve Edmonds went in to the exact same location. As if a magnet for boats, Bill Swan and Paul Brigham put their Jetpro Lites boat off in the same spot. With the meeting temporarily halted to consult drivers’ opinion, their call to resume racing broke the repetition spell.

Moving in to top-eight eliminations, Hutt Valley’s Ray and Nicky Ferguson then slipped from the water, inverting before right-siding and having the rear of their boat catch fire. Escaping to safety, the fire was extinguished quickly.

Then in the top-four, Wanganui’s Leighton and Kellie Minnell had the engine in their boat again destroy itself. That was followed by pace-setter Richard Burt leaving the track when methanol fuel seeped past a relief valve and on to the hot engine. Striking ignition point, the invisible methanol fire turned visible as other flammable items joined the mixture. Distracting Burt and navigator Maunder, they left the water, just cutting the finish beam to record a time for his run. Extinguished and feeling rather glad for the flame-retardant safety gear, Burt’s luck improved with the arrival of replacement safety belts from track owner Richard Murray.

Fast losing top-tier competitors, it was down to Burt and Waitotara farmer Duncan Wilson for the final. For the second time in as many events, Wilson and navigator Jamie-Lee Lupton could not believe their methanol powered boat wouldn’t start. Burt, needing only complete the course, put on a masterful display to set fastest overall time of the night.

“I loved it, the atmosphere was awesome,” described Burt. “From our point-of-view it was almost relaxed racing – the crowd made the very special – seeing all the people with braziers and barbecues.”

Needing only finish the final round later this month, Burt will earn enough points from the eight-boat field to secure back-to-back titles.

Also with a sizeable 11 point margin, having won four of the five rounds, Scott Waterjet Group A team of Baden Gray and Tanya Iremonger have defending class champion Bevin Muir and Kathy Barker on their heels. Leap-frogging Reg Smith in the standings, Thames based Muir had an unlucky finish to his night when mechanical failure and resultant fire wrenched victory from his hands.

With Auckland based Gray’s time on the board, Muir was up on the mid-run split time, until a suspected engine rocker cover gasket leaked enough oil to start a fire over the exhaust – to miss the leading time by 0.3 second.

Collecting the points, Gray says it was close enough him and the crowd on tenterhooks. “It was a great evening,” he enthused. “Bevin looked like he was going to put in a blinder but it wasn’t to be.”

“Now we just need to finish inside the top-eight at Featherston for the title. Once that’s done I’m going all out,” he added of his hero or zero plan.

Jetpro Lites defending champion David Stone of Bulls now has a six point lead after Whangamata’s Thompson failed to make it past the top-eight.

Following months of planning and hard work by track owners Richard and Julia Murray, the inaugural night championship event was hailed a complete success. The erection of permanent lighting towers adds a new dimension to the fast growing sporting passion – treating family and friends at their amphitheatre style venue.

Now with two weeks until the final, the 30-strong championship field heads to Featherston for the sixth round in the 2010 season. Held on the Saturday – before ANZAC day, the track is inside the Tauherinikau race course, approximately halfway between Featherston and Greytown.