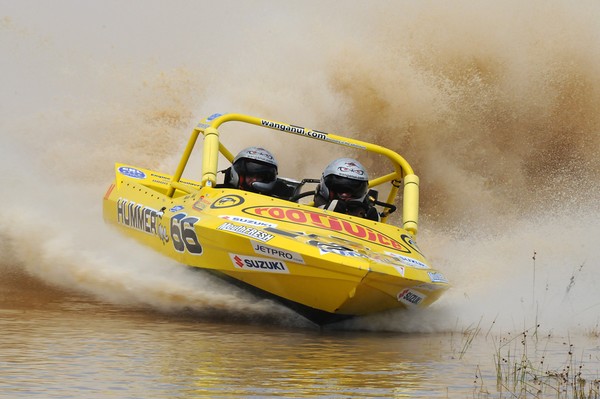 In a tussle for second overall in the Suzuki super boat category, Wanganui's Leighton and Kellie Minnell will start this weekend's final round of the Jetpro Jetsprint Championship near Featherston hoping for a mechanical free run in their methanol powered CREDIT: Ian Thornton

Jetsprinters risk it all this weekend

Saturday’s final round of the 2010 Jetpro Jetsprint Championship is sure to treat spectators with title contenders putting it all on the line in the run to the finish at Featherston’s Oldfields Aquatrack.

The shoot-out style competition places significant emphasis on driver ability and mechanical durability, to progress to the next level. From the methanol fuelled 1000 plus horsepower Suzuki super boats, the 600 horsepower Scott Waterjet Group A boats to the 500 horsepower Jetpro Lites, the risks and rewards are equal. Rewarded for finishing, a momentary mistake will invariably result in being eliminated from the day. Balanced against rivals who are after the same returns, the risk odds increase with inevitable spectator thrilling off-track excursions.

Circling the water-course, trained safety crew are often kept busy pushing boats back in the right direction. Familiar with some boats more than others, their presence is integral to the ever increasing profile the sport is enjoying.

“First up, it’s peace of mind, like an insurance policy really. The top jetsprint competitors say seeing our guys in their orange uniforms and the same familiar faces at events regularly is worth a second a run to them, or more,” says head of the RSQKRU (Rescue Crew) organisation, Mal Clunie.

“They have no fears about going that little bit harder or trying that bit extra, they don’t stop and think ‘if I do that I’m going to be in trouble’. Their reaction is ‘I don’t have to worry about that because the rescue crew are there’,” he adds.

Despite the hazards, the six round series climaxes after travelling the North Island, for the Wairarapa finale.

Of the three competition categories, only the Scott Waterjet Group A class has a leader other than a defending champion. Auckland’s Baden Gray and navigator Tanya Iremonger are on the cusp of their first title, while Suzuki super boat team Richard Burt and Roger Maunder, along with Jetpro Lites Dave Stone and Steve Greaves are poised for back-to-back wins.

Enjoying an almost insurmountable lead, Palmerston North’s Richard Burt needs only start the event to put the lead beyond the reach of his rivals. That then turns the competition to the chasing pack to settle the remaining podium positions.

“Leighton Minnell will be on his third engine, Duncan Wilson and Pat Dillon have had a few off’s this season – so I honestly couldn’t pick who’d be second, third or fourth, even if the TAB was taking odds,” said Burt of the tie in points between Minnell and Wilson ahead of the weekend finale.

With 30 points on offer for the win, Jetpro Lites leaders Stone and Greaves from Bulls have to finish fifth or better to avoid a tie with Whangamata’s Ray Thompson and navigator David Toms. Having two wins for the season Thompson has shown he can challenge Stone to again shorten the odds for Saturday’s competition.

Following rotation familiarisation early in the morning, the season finale kicks off from 11am with the 30-strong ensemble progressing through qualifying to the early afternoon top-16 cut. Whittled to the top-two for the shoot-out, each of the winners will be awarded their provisional titles track-side pending technical clearance.

Gate entry costs $20, with access off SH2 to the Tauherinikau race course 4.5 kilometres north of Featherston.