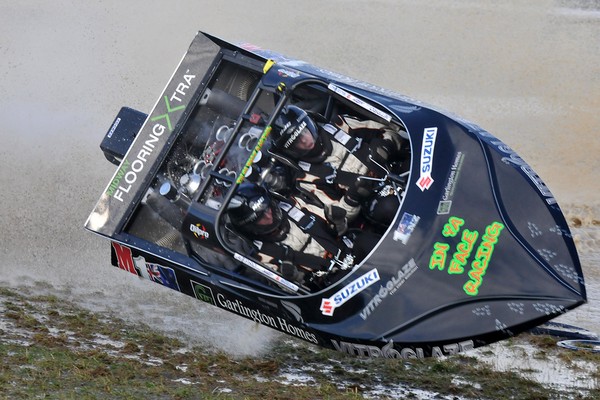 Richard Burt and Roger Maunder had a brush with the scenery during a triple-roll CREDIT: Ian Thornton 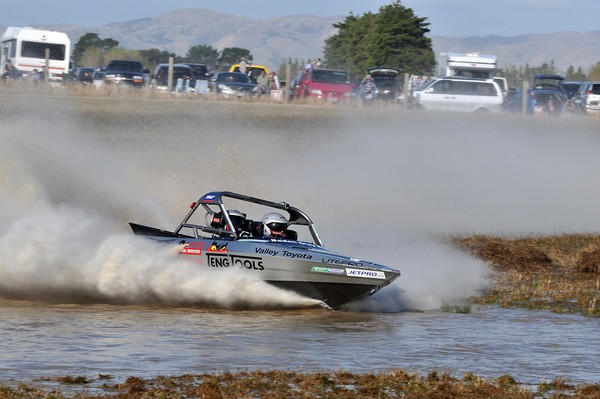 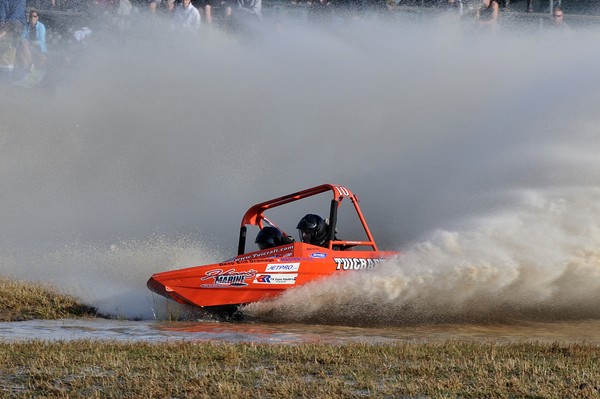 Ignoring weather predictions, warm sunny weather rounded out the six-round season that ultimately reinstated each of the three category defending positions to the top. Needing only to start today’s first qualifying run secured Suzuki super boat team of Richard Burt and Roger Maunder their second successive title, before spectacularly eliminating themselves from the day. Clipping an island mid-course, Burt didn’t regain his composure in time to react to the up-coming turn, rolling three times, with heavy impact damage to the right-side of the Garlington Homes/Vitroglaze boat’s hull.

“Winning the title first thing we just wanted to put a show on for the crowd,” said Burt. “But obviously it was a bit more than we expected.”

“Looking at the video footage we just ran out of water and went in to three barrel-rolls – the boat is pretty much a write off.”

Next was leading Scott Waterjet international Group A team of Baden Gray and Tanya Iremonger of Auckland. With a nine point lead heading in to today’s final, Gray needed to progress to the top-eight cut to secure his maiden title. Making a navigation error in the top-16 ousted the Auckland mortgage broker, putting defending champion and boat share-driver team of Bevin Muir and Kathy Barker back in title contention. Duelling with Taupo’s Reg and Julie Smith for the remainder of the day, it came down to a difference of 0.01 second in the final shoot-out to sort the positions. Muir and navigator Kathy Barker of Thames claimed the day’s win, with Smith relegated to third overall in the standings, behind Gray.

“We had a big week and we didn’t want to Chernobyl another engine,” explained Muir after having a re-built engine installed on Friday. “We’ve been cautious and wanted to circulate, get the points, but then it was good to be able to compete too for the final. Baden told me to put a bit more pressure on for the final – and here we are.”

Then in the top-four eliminations, Wanganui’s Leighton and Kellie Minnell made a navigational error in the Suzuki super boat category. Battery failure stopped the engine of Waitotara’s Duncan Wilson and navigator Jamie-Lee Lupton’s methanol powered boat just as they were about to turn, resulting in the pair beaching backwards. That left Wanganui’s Pat Dillon and Steve Edmonds to duel with Auckland’s Brent White and Morris Edwards for the final. After many runner-up results, Dillon in the super-charged Ford 410 boat, claimed the chequered flag position, finishing second overall in the standings.

“This is my first ever first on race day,” said an elated Dillon. “It’s been twelve years without a win and makes a really good start for next year.”

While the action thinned the Suzuki super boat and Scott Waterjet Group A international classes, the 500 horsepower Jetpro Lites category were left with title leader David Stone and navigator Steve Greaves to comfortably take their fourth round win of the season. Eliminated in the top-eight, Whangamata’s Ray Thompson and David Toms had enough of a points buffer to secure second overall, while Wanganui’s Bevan Linklater and navigator Paul Tulloch had their best result of the season to place behind Stone for the day.

“The pressure was on us to win the last two meetings, and then when Ray (Thompson) dropped down a bit at the last round, it made our job a bit easier,” said Stone, from Bulls. Needing to stay focused, he said securing the second title was even more rewarding: “It’s a better feeling than the first one – we found it quite hard this year with a few mistakes, so to get back-to-back – it’s incredible.”