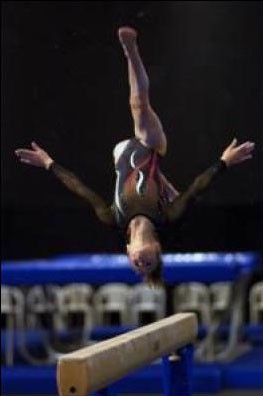 A 13-year-old school girl from Remuera will come up against top world-class gymnasts she has admired in magazines when she competes in the Pacific Rim Championships this month – only the second time she has represented New Zealand.

Brittany Robertson, a Year 9 student at Diocesan School for Girls, is the youngest artistic gymnast in the 25-strong New Zealand gymnastics team competing at the biennial championships being held at Melbourne’s Hisense Arena from April 28 to May 2.

The gymnasts were selected out of 44 from around New Zealand who trialled to compete in the rhythmic, artistic and trampoline sections of the competition which is considered the world’s third toughest behind the Olympics and the World Championships.

“It’s going to be a very tough competition and even to get into the finals would be absolutely amazing,” says Brittany, whose gymnastics talent was spotted when she was only four.

The Pacific Rim Championships are open to teams from member nations of the Pacific Alliance of National Gymnastics Federations, including the U.S.A, China, Australia, Canada, Mexico, New Zealand, Japan, Russia and other nations lining the Pacific coast.

Brittany has been training 27 hours a week in the beam, bar, floor and vault at the North Harbour Gymnastics Club under head coach, Russian-born Alexandra Kourdinova, who has coached her for three years.

Last year Brittany trained in the United States alongside 2008 Olympic champion Nastia Liukin and other top U.S., Russian and Japanese gymnasts. In December she went to her first junior international competition, the Mikhail Voronin Cup in Moscow where she made the finals in the uneven bars and the floor. In February she competed in the WOGA Classic in Dallas, Texas.

When she was nine she represented New Zealand in the Victorian Championships in Australia.

But this month’s competition will be her toughest yet in which she will be pitted against a powerhouse of top gymnasts including Victoria Komova from Russia and Madison Kocian from the United States.

“I’ll be competing against gymnasts who I’ve read about in magazines and admired from afar,” says Brittany.

The secret to her success is having good time management and getting up early.