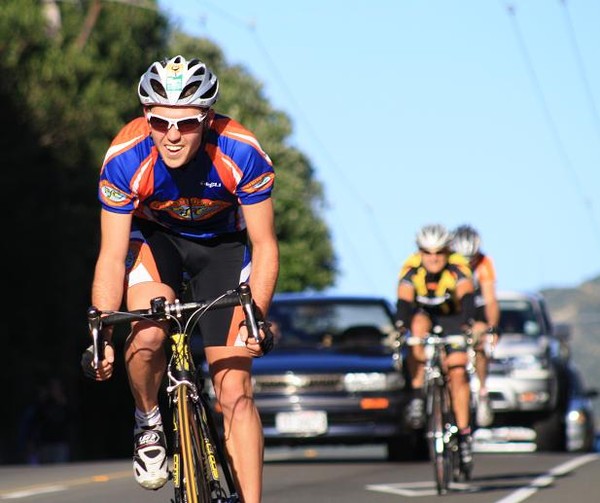 Round one in the Contact Duathlon Series was held in perfect weather at Fielding today with athletes looking to qualify for the World Duathlon Championships in Edinburgh later this year and it was a 25 year old ‘doctor in waiting’ who took line honours.

Duathletes were greeted by a calm warm day with the mercury reaching 18 degrees, making for perfect racing conditions for all competing, from the elites to the age groupers just out for an enjoyable day’s exercise.

In the men’s it was American Carey Chaffee who threw down the gauntlet on the opening 10km run, leading the field back to transition in a tick over 32 minutes. But that was to be the last we would see of Chaffee near the front of the field with the Kiwis taking over during the 40km bike leg.

Rotorua’s Ben McHale led Adam Milne (Christchurch) off the bike with both athletes turning in impressive 1hour 3 minute rides in the still conditions. David Plew (Christchurch) had also moved past a tiring Chaffee into third.

McHale though proved too strong and was clearly the best all round duathlete on display as he came home in 1 hour 54 minutes and 3 seconds, over a minute clear of Milne with Plew holding on to third. The result is all the more impressive for McHale who juggles what little spare time he has for training with his medical studies where he is in his fourth year at Wellington Hospital.

The 25 year old has made rapid improvements in his cycling since taking up the sport in 2008 following a succession of running induced injuries. His potential was highlighted with a 15th place finish in the U23 Duathlon World Champs in Italy in 2008.

Burke rode the 40km bike in an hour and eight minutes, in doing so eclipsing many of the times set by the men in the event and clearly the quickest in the women’s division.

Gardner led after the first 10km run but even then Burke was only 15 seconds behind and had made this up with a few strokes of the pedals on the bike.

Athletes in all age groups and divisions were looking to qualify for the ITU World Duathlon Championships in Edinburgh in September this year. Included amongst the qualifiers were juniors Ryan Dingle (New Plymouth) and Mkayla Nielson (Waikato) who won their sprint event today, showing real potential for later in the year.

For Dingle it marked double qualification as the youngster has already qualified for the World Triathlon Championships in Budapest in , suggesting a longer stay in Europe might be on the cards.

Race two in the Contact Duathlon Series is in Christchurch on August 22nd and doubles as the 2010 National Championships.


Full results will be posted to www.triathlon.org.nz later today