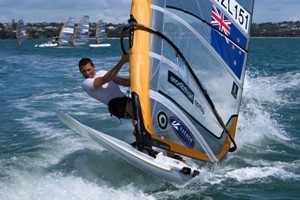 Jon-Paul Tobin (pictured left) represents New Zealand in the 100-strong Men’s RS:X fleet. In racing last night the North Shore board sailor started off with a seventh place in race one followed up with two fifths in races two and three.

At the end of the first day of the series Tobin’s pointscore is 17 and putting him in sixth place in the standings. Mashiah Nimrod of Israel has the early lead in the class.

Peter Burling and Blair Tuke, competing in the 49er, are in 16th place after the first day of racing at this ISAF World Cup regatta. Four races were sailed with qualifying rounds being contested in two fleets.

The kiwis had two fifth placings, a seventh and a 27th giving them 44 points.

Over in the Women’s Match Racing Stephanie Hazard is at the helm of the Elliott 6 metre with crew Jenna Hansen on main, and Sam Osborne on the bow. With 24 entries the round robin racing is staged in three groups of eight.

The New Zealanders, sailing in group C, recorded one win and three losses on day one.

No results are available for the Women’s RS:X class in which Natalia Kosinska lines of to represent New Zealand.

This is the fifth event in the ISAF Sailing World Cup for Olympic class sailors with an entry list featuring numerous World Champions and Olympic medallists. Racing runs over five days with medal races scheduled for Sunday.