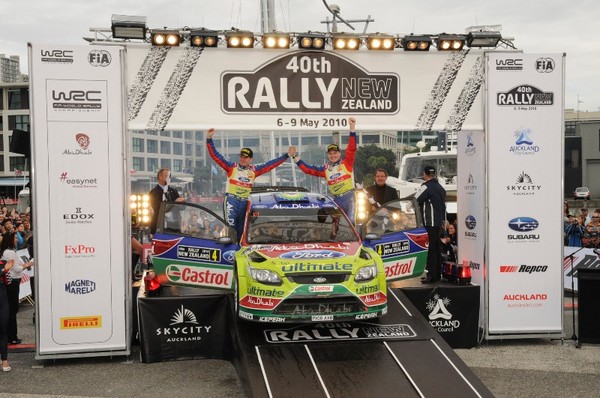 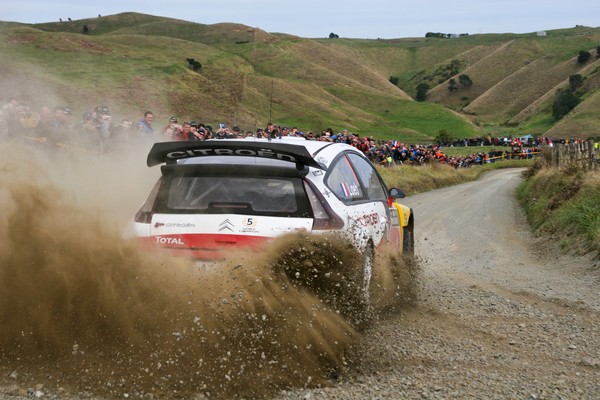 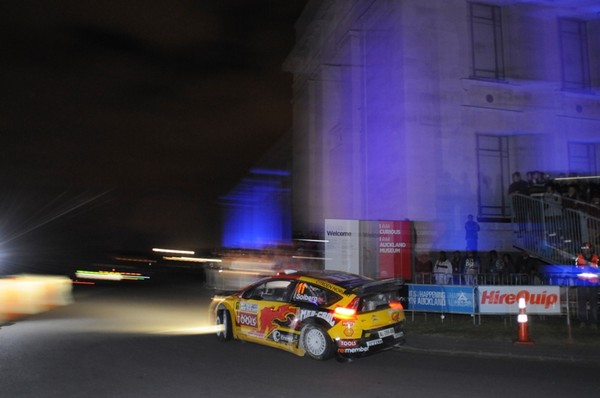 Popular WRC driver Petter Solberg had the lead by the end of day one in his privately-entered Citro&#235;n C4. Solberg is seen here in action on the Auckland Domain super special stage which attracted around 25,000 fans. CREDIT: New Zealand/Geoff Ridder 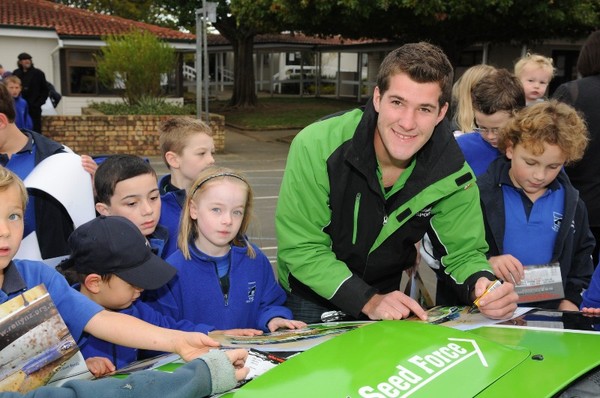 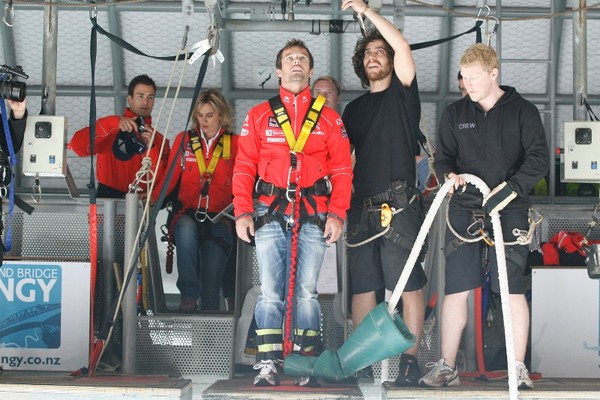 Fortieth Rally New Zealand one of the very best

With the dust now well dampened after the 40th running of Rally New Zealand at the beginning of May, organising committee members with many years of experience running the international event said it was one of the very best events of this name ever run.

“From a sporting point of view, you couldn’t have scripted that finish better if you’d tried! BP Ford driver Jari-Matti Latvala was the right man in the right place to take the rally victory. It went down to the third-to-last corner of the very last competitive stage when the until-then dominant Citroens of Sébastien Loeb and Sébastien Ogier faltered, with Latvala perfectly placed for his third WRC win,” says Carr.

“It was an absolute delight to see how many people came out to watch the event and how much media coverage the event received locally and internationally. In addition, we were rapt to see how well received new initiatives like the day of motorsport action Hampton Downs and returning to the Auckland Domain for a super special stage were. It all came together in one fantastic event which really reflected the true spirit and passion New Zealanders have for top level rallying.”

Carr says organisers’ best estimates of spectator numbers indicate around 95,000 people went out to watch at least one aspect of this year’s Rally New Zealand.

“The crowd in Auckland Domain on the Friday evening was phenomenal! A good 25,000 people were there enjoying the action as world’s best drivers blasted through the night-time special stage on roads right in central Auckland. The Auckland Museum was a real showcase for Auckland, looking absolutely fantastic with its new lights.”

Saturday’s two super special stages ran at the new Hampton Down motorsport complex midway between Auckland and Hamilton, complemented by a variety of other races, displays and activities, and drew a crowd of around 15,000 fans. Other event venues – the service park on Auckland’s waterfront Queens Wharf, the start and finish ceremonies in Viaduct Harbour and the three days of special stages throughout the Whangarei, Kaipara, Franklin, North Waikato and Raglan districts – attracted approximately 55,000 people over the whole event.

“The crowd figure of 95,000 makes this Rally New Zealand one of the most successful and popular events in recent years. This level of demonstrable fan support is even more pleasing considering the current economic climate which, although improving, is still a challenging environment in which to secure commercial sponsorship,” says Carr.

“Many favourable comments have been made about the rally route and how our personnel managed vital elements such as the timing control points and spectator viewing points,” says Martin.

“As a huge team of primarily volunteers, we can be very proud of our efforts to deliver a world-class event, which continues to be rated very highly by drivers, teams, WRC promoters North One Sport and the FIA (Federation Internationale de l'Automobile).

“We thank an enormous number of people who all played a role in making Rally New Zealand such a success. From farmers, residents and businesses on the roads used for rally stages and the surrounding access roads, to the councils of Whangarei, Kaipara, Auckland, Franklin and Waikato – many people have contributed in one way or another.”

“The on-again, off-again news about Rally New Zealand’s place on the FIA World Rally Championship calendar highlighted to Kiwi rally fans the different commercial and sporting factors which are taken into consideration by the FIA and North One Sport for an event’s inclusion on the WRC calendar,” says Martin.

“Then the volcanic ash clouds cancelling flights all over Europe caused concern to some – not us – that our event may be impacted.

“The net effect was increased awareness of the whole event, which coincided with the event’s move to be closer to the larger population base around Auckland. The considerable promotional efforts from our team, Auckland City Council’s major events team and SKYCITY Auckland also helped create one of the highest profile events we’ve seen for some time. We also had tremendous support from the New Zealand International Grand Prix (NZIGP) organisation whose members put together the fantastic and very popular day of motorsport action at Hampton Downs.”

Coverage in print, radio, online and television media was extensive, with Carr, Martin and Rally New Zealand’s general manager Paul Mallard being interviewed on virtually an hourly basis in the few days leading up to and during the event. Interviews with many local and international competitors, pre-event activities like the WRC drivers bungy-jumping off Auckland Harbour Bridge and the rally results generated hundreds of media reports.

Sky Sport 3 broadcast 15 hours of live rally footage, supplemented by expert commentary and guest interviews for local rally fans. Rally New Zealand’s website, www.rallynz.org.nz, attracted more than 38,000 visitors during the week of the event, and the World Rally Championship website, wrc.com, published 65 stories about Rally New Zealand which were read by more than 230,000 people from 126 countries. The daily highlights packages from WRC TV were watched by more than 50 million people.

Carr congratulates the winners of a number of competitions run during the lead-up to Rally New Zealand.

“The Auckland Domain stage was preceded by a secondary school trolley derby with Alex Wiggans from Rosehill College the winner,” says Carr. “Both the Northern Advocate and the Waikato Times ran promotions with Nathan Walker and Tony Grisedale their respective winners who enjoyed accommodation courtesy of SKYCITY Auckland and VIP passes to the whole rally. A competition on Rally New Zealand’s website saw Mark Whittle selected from hundreds of rally enthusiasts, who registered for our regular newsletter, to win a ride with a top competitor during shakedown in the Domain. Several thousand fans entered a competition on wrc.com to win a trip to Rally New Zealand from anywhere in the world with flights provided by Air New Zealand. The winners of this competition were Guillaume and Christine Malsot from Chaponnay in France, who enjoyed seeing the event with Rally Tours NZ.”


Carr says Rally New Zealand remains a reserve event for the 2011 FIA World Rally Championship calendar. “While the logistics of proposed dates for Rally New Zealand being right at the time of the Rugby World Cup here mean that it’s unlikely Rally New Zealand will get a slot in 2011, we continue to talk with WRC promoters North One Sport regarding a workable date on the 2012 calendar.

“In the meantime, on behalf of everyone involved with Rally New Zealand, our heartfelt thanks to everyone who came out to support the event and help us make our 40th year truly memorable. To all the competitors, officials and fans, thank you!”

Key facts from the 40th running of Rally New Zealand
§ Of the original 56 entries from 17 different countries, 54 competitors started the event and 38 finished.
§ The rally comprised 21 special stages covering 396.5 competitive kilometres and 1496.51 kilometres in total
§ Jari-Matti Latvala won the event, joining fellow Finns Hannu Mikkola, Timo Salonen, Juha Kankkunen, Tommi Makinen and Marcus Gronholm on the Rally New Zealand winners’ list.
§ Latvala’s winning margin of 2.4 seconds over second-placed Sébastien Ogier was the third closest finish in WRC history.
§ The best of the non-WRC drivers was another Finnish driver Jari Ketomaa driving one of the new class of cars, a Ford Fiesta Super 2000, for the Shanghai RCACA Rally Team, the only Chinese team to ever enter a full World Rally Championship series.
§ The first New Zealander to finish was Hayden Paddon, who was 14th. Paddon also won the Production World Rally Championship category.
§ Rally New Zealand hosted their first ‘behind the WRC’ lecture at Auckland University with several hundred people enjoying a series of informative, entertaining talks from WRC team and organising personnel.