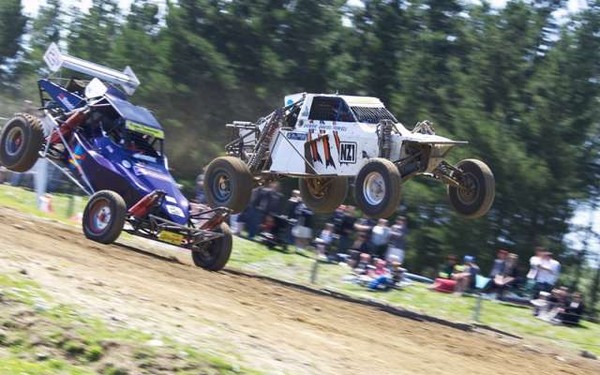 Current NZ1 Dennis Andreassend will be desperate to get his championship defence back on track at this weekends round of the 2010 Asset Finance Offroad Racing National Championship in Canterbury. He missed the first South Island round in his hometown of Nelson when he broke an axle putting his car on the trailer. Andreassend will have his work cut out for him though; local driver Daniel Powell is intent on reclaiming first in New Zealand this year. Powell won the championship in 2008 but just missed out to Andreassend last season. Although Powell has a huge power advantage with his 650hp Nissan powered Jimco, it is Andreassend who is the favourite to win with his Porsche powered Cougar. The mid-engine set up of Powell's car makes getting the power to the ground near impossible in the wet and with the rain we've had lately it looks like Powell will have a real struggle on his hands. With Andreassend and Powell battling for first and second, it is expected that Ashley Kelly will take third. There are still doubts though about whether Kelly will make it to Canterbury. A huge roll over on the final lap of the Nelson Ruff 'n' Tuff in April left Kelly with a massive amount of work to get the car back to racing condition and it is still unclear whether he will be a starter at the Mainland Challenge.
The Mainland Challenge is being held at The Rock Fm Offroad Raceway, Weedons Ross Rd, West Melton. Racing on Saturday the 19th starts at 11.30am and entry is only $10, with under 12s getting in for free.