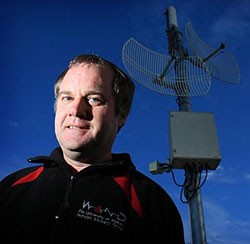 It was only when he moved to the country that Murray Pearson truly realised the importance of broadband.

“We were only 13km from Hamilton but only able to get dial-up," he says.

“I was using broadband every day at the university, and knew what we were missing. It only became available down our road four years ago.”

The former Waikato University computer lecturer set up a research project which aimed to deliver broadband for remote, rural communities – mainly based on low-cost wireless technology.

Pearson now heads Rural Link, a joint venture between the university’s commercialisation arm WaikatoLink and the rural IT provider Rezare Systems. The network connects communities from Ngaruawahia in the north, to Whakamaru in the south and the Kaimais in the east.

“When you live in the country, you’ve got to be able to keep up with your city counterparts.” Pearson talked about the rollout of broadband at the National Agricultural Fieldays as part of Waikato University’s Seminar Series.

“More and more organisations, Fonterra, Federated Farmers and the like, want their information available electronically and farmers need to be able to access it. There’s nothing worse than not being able to download a two meg file.

"The government is investing 300 million dollars over the next six years to ensure 97 per cent of the New Zealand population has broadband – five megabits or better. The last three percent will probably get one megabit or better, which is an improvement on dial-up’s 50k.”

Wireless technologies will play a large part in delivering broadband to some of these areas.

“There are people who have the vision of getting fibre to every home in the country but I can’t see that being a reality in the foreseeable future, the costs will be too prohibitive. I think farmers will want to hear that there are solutions that will be able to reach them – wireless solutions can offer a very good service.”
The team managed to install broadband five years ago deep in Tuhoe country – “This was in a really remote region, some of it was in the middle of the Ureweras. We’ve done an upgrade of that network now.”

There’s also been good progress in the Waikato’s own Te Pahu, which had broadband to just 34 houses a few years ago. “The community set up its own broadband society, which was the only one in the country. They’ve just handed the role of managing that to us, but the network just continues to grow.”

Farmers will want to know when they can expect broadband. “I expect the government will start investing at the end of this year; the focus will be on getting fibre to the schools. Once that’s done, it gives us the opportunity to reach the more remote, rural areas.”

There are still questions to be answered about how much funding will be available, but it’s just a matter of time, he believes.

“It will happen, the government is committed, and in fact, it’s the direction many governments are taking worldwide. The feedback we get from people is that it puts them in a different world. It’s nothing short of life changing for them, and of course, is vital for our economy.”