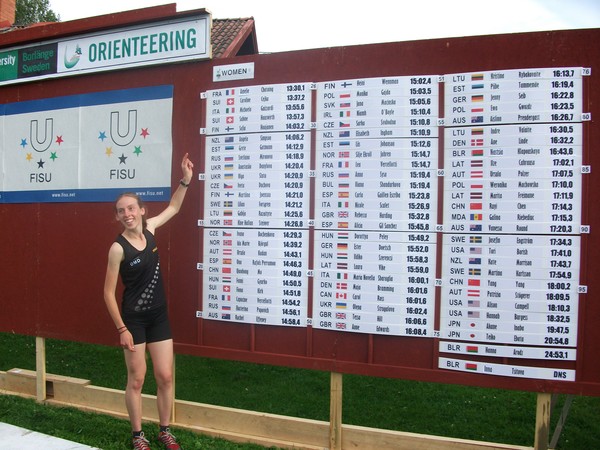 "I was aiming to enjoy the experience and had a good, clean run" said the 18 year old Environmental Science student. "The course was tough - tricky bridges and underpasses in the urban section, and hilly forest to navigate through. I lost a few seconds here and there."

“The hilly courses suited us, and the Swiss too” Simpson said. “And the Swedes haven’t really fired, which is surprising on their home terrain”

Swiss orienteers took 2nd and 4th, and Sofia Haajanen (Finland) in 5th was the only Scandinavian in the top 10.

Two thirds of the way through her 2.6km course, and with 5 controls to go, Simpson heard that she was in second place at the spectator control.

“I felt the pressure there; it was pretty exciting!” she recalled. “Luckily there were a few girls ahead that I could focus on passing”.

Keeping cool under pressure while navigating at top speed through the forest are attributes that have already given Angela Simpson a 17th placing at the Junior World Championships two weeks ago.

She is looking forward to another “enjoyable” race over the Middle distance on Thursday, and Fridays Relay where she will run with teammates Kate Morrison and Lizzie Ingham.

After missing the Long distance with ankle problems, Lizzie Ingham, also a top 20 finisher at Junior Worlds, bounced back to pick up 31st.
Ingham is still receiving treatment for her ankle and may miss one or both remaining races.

Thomas Reynolds was the best of the New Zealand men with 41st place.

There are 309 participants from 31countries participating at the World University Orienteering Championships.

The 6th place from Angela is the best ever by a New Zealand woman and equals team coach Alistair Landels 6th place in the Long distance in the WUOC in Scotland in 1992.