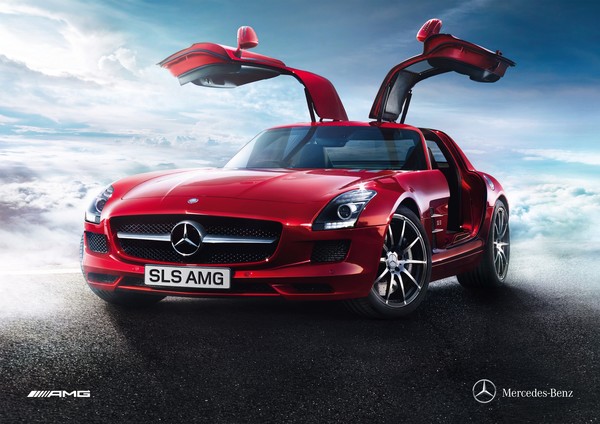 Heads will turn, jaws will drop and new entries will be added to wish lists around the country as the brand new Mercedes-Benz SLS AMG Gullwing touches down for the first time in New Zealand this weekend.

This NZD$450,000 car is the jewel in the Mercedes-Benz crown. A masterpiece that oozes style, strength and speed and one of only nine SLS Gullwings that will land in New Zealand this year (seven of these have already sold to customers).

For most of us, this is a car lotto dreams are made of, yet this weekend Aucklanders have the chance to get up close and personal with the SLS Gullwing as Coutts Newmarket holds an open day for the public. First released in 1954, the 2010 SLS Gullwing is a reinterpretation of the ‘Sports Car of the Century’, the original Mercedes-Benz 300SL.

“The Mercedes-Benz SLS AMG Gullwing is one of those very special vehicles, a car steeped in nostalgia and history. Quite simply it sets pulses racing. When we received our allocation of nine of these beauties we knew we had to give all Kiwis the opportunity to see an important piece of motoring history,” says Coby Duggan, Mercedes-Benz Passenger Car General Manager.

The vehicle is the reborn 1954 Mercedes-Benz 300SL. The original ‘Gullwing’ vehicle crowned Sports Car of the Century was the fastest production car of its day.

The 2010 SLS is a modern take on a 50 year old design, retaining some of its key distinctive features but blending it with modern technologies to produce an elaborate and unique vehicle that exceeds all expectations.

The new SLS Gullwing retains the long bonnet and short rear deck combination of old as well as the striking ‘Gullwing’ doors. The wide radiator grille with its large Mercedes star, the wing shaped fins on the bonnet and the flanks also harp back to the legendary sports car of the 1950s.

But it’s not all about the looks, this vehicle has the brains and the brawn. The ‘Gullwing’ accelerates from 0 to 100km/h in 3.8 seconds, before going on to top speed of 317 km/h (electronically limited). It features a powerful eight cylinder Mercedes-AMG engine that develops 420 kW/571 hp at 6800 rpm, making the SLS AMG one of the most powerful sports cars in its segment.

This masterpiece is completed by an unrivalled technology package and an aluminium space-frame body which dramatically drops the vehicle’s kerb weight to 1620 kilograms. This lightweight construction, the vehicle’s low centre of gravity and its superior handling pave the way for high lateral acceleration and exhilarating driving dynamics.

“Mercedes-Benz is a company that is dedicated to innovation – from the invention of the very first automobile in 1886 to this new legend of unrivalled performance. There were certain design lines we couldn’t go past in the original 300SL Gullwing but coupled with the new engine, aluminium frame and futuristic interior design we have created a vehicle that truly turns heads and pushes boundaries,” says Mr Duggan.

Also on exhibit at Coutts Newmarket this weekend is an original 1957 Mercedes-Benz 300SL roadster. Owned by car enthusiast and collector Gary Boyce, this is an internationally awarded restoration project and masterpiece in its own right.

For a limited time, the all-new Mercedes-Benz SLS AMG will be touring Mercedes-Benz showrooms nationwide. This is a rare opportunity for New Zealanders to get close to the super sports car that, since 1954, has defined exhilaration.