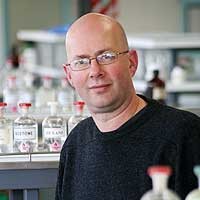 Professor Simon Hall, a professor of electrochemistry and director of Massey's Anzode Research Centre, has won this year's Bayer Innovators Award for research and development.

Professor Hall was one of three Massey scientists among the 12 finalists in the awards. The others were Professor Harjinder Singh co-director of the Riddet Institute at Manawatu, and Dr Wayne Patrick, a senior lecturer in biochemistry at Albany.

Professor Hall worked with PhD student Michael Liu to invent a new zinc electrode for nickel-zinc rechargeable batteries, and has taken a leading role in commercialising the product from its initial development, forming a start-up company for making prototypes. The new batteries are intended to replace nickel-cadmium and lead-acid batteries.

Professor Hall was awarded the 2008 Fonterra Prize for Industrial and Applied Chemistry, and a Distinguished Patent Award from the United States Energy Department in 2005.

The awards were announced in Auckland last night. For more information about the awards and the other finalists: http://www.bayerinnovators.co.nz/news/