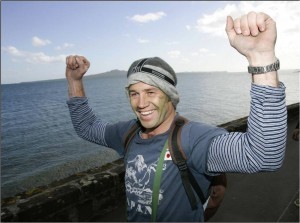 In 2009 New Zealander Mal Law made history by becoming the first person ever to run NZ’s seven Great Walks in just seven days – a total distance of 360 kms in the longest week of his life. It was an adventure to honour the memory of his brother Alan, who died as a teenager from leukaemia. In completing the 7in7 Mal raised more than $85,000 for the Leukaemia & Blood Foundation of NZ and so helped make a huge difference to people suffering from this cruel illness.

Inspired by this success, Mal has undertaken to run another great 7in7 Challenge in 2010. Seven more iconic trails, seven more gruelling days, the same great cause. This year’s 7in7 Challenge will start off with a new event: The Twin Lakes Marathon on Sunday 28 November. Run in conjunction with Wanaka based company, Media Unlimited, the Twin Lakes Marathon will take Mal and his supporters along the network of tracks from Lake Hawea to Lake Wanaka, finishing at Glendhu Bay.

The 2010 7in7 Challenge also has the backing of a celebrity runner in the form of former All Black and now popular TV figure, Marc Ellis. Ellis’ support extends not only to joining Mal in running the Twin Lakes Marathon but he will also play the role of auctioneer at the 7in7 Challenge pre-Day 1 charity auction to be held at Wanaka Mitre 10. Ellis is quoted as saying “It is hard not to get inspired by the cause and the people involved. It would be both a fantastic and fitting result if Mal and his team were able to raise their target of $150k for the Leukaemia and Blood Foundation”.

As a regular visitor to the Wanaka region, Mal has long been a fan of its unique natural environment and special sense of community spirit. The community is certainly supporting Mal in his fundraising endeavours. Wanaka Mitre 10 store manager Mark Watson has announced that he and all his staff want to get behind the 7in7 Challenge in any way they can. They hope to have staff running on every day of the Challenge, including a huge contingent at the Twin Lakes Marathon and they will also help with volunteer duties. The Mitre 10 staff has set themselves a fundraising target of $10,000.

Learn more about the Twin lakes Marathon at www.twinlakesmarathon.co.nz and the 7in7 Challenge at www.7in7.org.nz