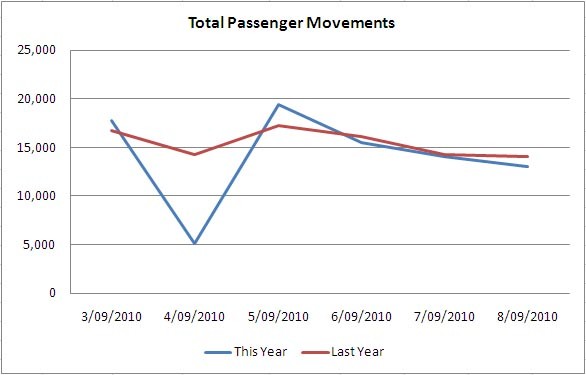 An analysis by Christchurch International Airport of airline passenger movements between Friday 3 Sep 2010 and Wednesday 8 Sep 2010 shows that aside from a significant dip on the day of the earthquake when the airport was closed for seven hours, passenger movements have stayed steady in the week following the quake, comparable to numbers from the same time last year.

“It’s early days yet following the quake, but we’re delighted that so far numbers have stayed steady and that people are continuing with their travels to our resilient city,” said CIAL Chief Executive Jim Boult.

“We’ve broken several passenger movements records this year, and last month was no exception. We had a record number of total passengers for any August, and a record number of domestic passengers for any August. As the city returns to full functioning, we look forward to breaking more passenger records, which will support and grow the tourism industry which is so important for the Canterbury region.”

98% of all tourism operators in Christchurch are now fully functional and they are preparing for an influx of visitors during the upcoming school holidays.