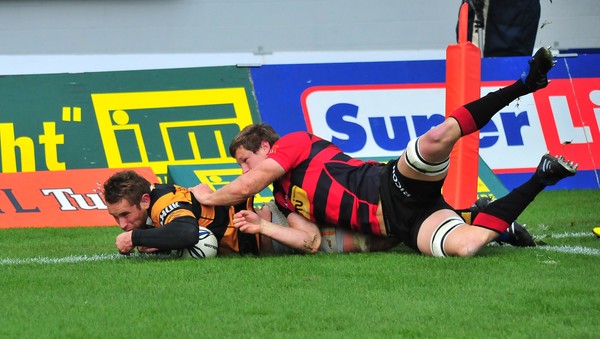 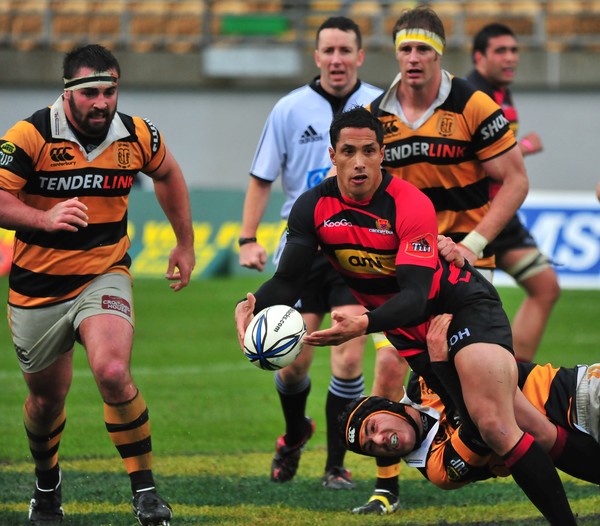 Top of the table Canterbury and fourth placed Taranaki squared off in windy and showery conditions that made it into a forward grind.
Both teams at times tried to use their backs, this lead to several handling errors. Although there were some good back line moves.

Canterbury came out strong putting pressure on Taranaki from the kick off gaining a penalty near half way; from this they spread the ball through the back line

On the back of a strong break by Stephen Brett the ball went on to Sean Maitland to score near the corner on the back of some weak defence by Taranaki.

Stephen Brett converted the try to give Canterbury the lead 7-0 after only 1min 30 sec’s.

After some see sawing play Taranaki gained a scrum just outside the Canterbury 22 mtr line from a strong forward effort No 8 Ben Souness broke from the base of the scrum to run the 25mtrs to score. Taranaki’s No 10 Willie Ripia missed the conversion the score 7-5 to Canterbury.

11 minutes into the game saw Canterbury backs throw the ball around catching Taranaki offside at the ruck giving Canterbury the chance to convert a penalty which they took
Stephen Brett converted Canterbury 10-5.

After a kick out wide Taranaki’s Andre Taylor took the ball and passed to Kurt Baker to scoot down the wing to score in the corner for Taranaki; Willie Ripia converted to give Taranaki the lead 12-10.

On the 34th minute mark Taranaki’s George Pisi went over for a try close to the posts which was converted by Willie Ripia to give Taranaki the half time lead 19-10.

From the kick off of the second half Canterbury again applied sustained pressure through the backs and gained a penalty in front of the posts for an easy conversion
to Stephen Brett to close the gap to 19-13.

Canterbury again took it to Taranaki and after some slick passing through the backs out to the wing and back a short pass put Sonny Bill Williams away for a try under the goal posts. This was converted by Stephen Brett and Canterbury was in front 20-19 and were looking as though the y were to take charge of the match.

Taranaki how ever had other ideas with the forward pack seeming to be getting the better of their counterparts and after a series of drives from the ruck the ball was passed out to Jarrad Hoeata who ran down the blind side to score. The conversion attempt into a strong westerly went wide but Taranaki took the lead 24-20.

In the slippery conditions it was always going to inevitable that some one would spill the ball and after a kick through Sonny Bill Williams went down on the ball in front of the Canterbury line, from the ensuing mall the ball came loose over the goal line and replacement Beauden Barrett dived on the loose ball to score for Taranaki.

The try was converted by Andre Taylor and Taranaki lead 31-20 after 69 minutes.

The final 10 minutes of the game saw Canterbury try to spin the ball but strong defence by a determined Taranaki side and some poor handling saw Taranaki get the win and a bonus point for scoring four tries, final score 31-20.