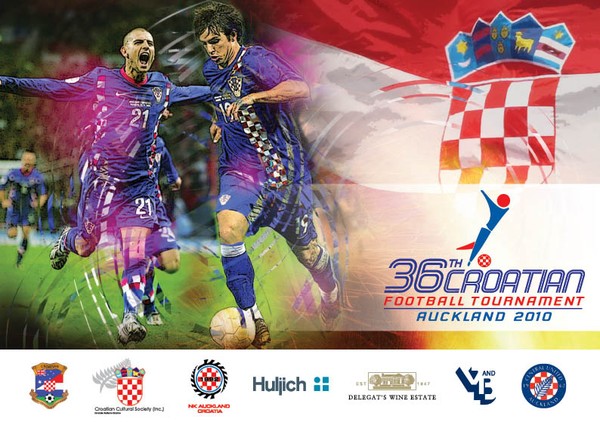 This week will see over a thousand Australians descend on Auckland to participate in the 36th Annual Australian & New Zealand Croatian Football Tournament.
2010 marks the first occasion that the tournament will be held outside Australia. This year’s competition will be hosted by the Croatian Cultural Society in Auckland and will feature 23 men’s and 8 women’s teams. 26 of these teams will travel across from Australia to compete.

The original inspiration for the tournament, which is run by the Croatian Soccer Federation of Australia & New Zealand, came from the successful Croatian-North American Soccer Tournament which was founded in 1964.
The first official Australasian tournament was staged in 1975 and was hosted by Sydney Croatia who lost in the final to Canberra FC. Since then it has gone on to become the largest and oldest ethnic football tournament staged in Australia having been hosted in every state and territory except the Northern Territory.

All of the clubs competing were formed by Croatian immigrants and many of the players who will compete in the tournament come from Croatian backgrounds. World class players such as Mark Viduka, Mark Bosnich, Josip Simunic, Tony Popovic, Graham Arnold, Robbie Slater, Steve Horvat, Eddie Krncevic, Joe Didulica & Josip Skoko have previously played in the tournament illustrating the quality of some of the footballers that will likely be on show this week.

Other teams to watch out for include Adelaide Raiders, last years champions, who were coached this season by Australian football legend John Kosmina and captained by the experienced former A-League defender Richie Alagich. Canberra FC who have just claimed their 9th ACT State League title in the past 10 years will once again be among the favourites along with Melbourne Knights, one of the most successful clubs in Australian football history.
Friday’s action will see the Official Opening Ceremony take place at the Croatian Club Playing Field at 9am to be followed by a full day of play at all three venues. The action will continue on Saturday with the Finals being played at the Croatian Club on Sunday from 10.30am. The Croatian Club will be providing great entertainment and food over the course of the tournament and entry to all three venues is free of charge.

One of the highlights of the tournament will be the Miss Croatia Pageant and Gala Ball which will be held at the SKYCITY Grand on Saturday 2 October.