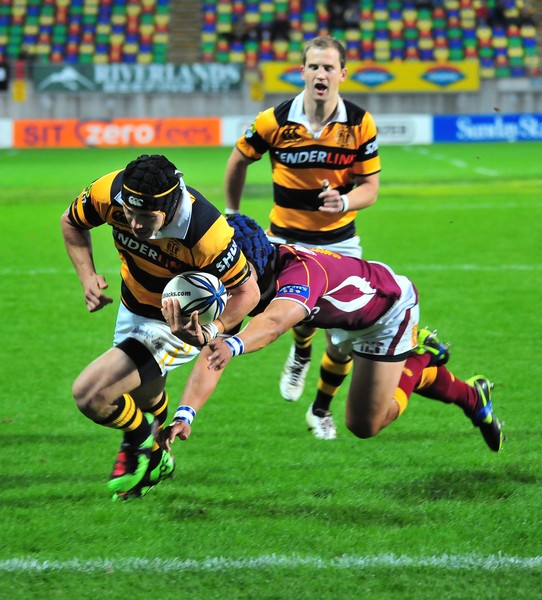 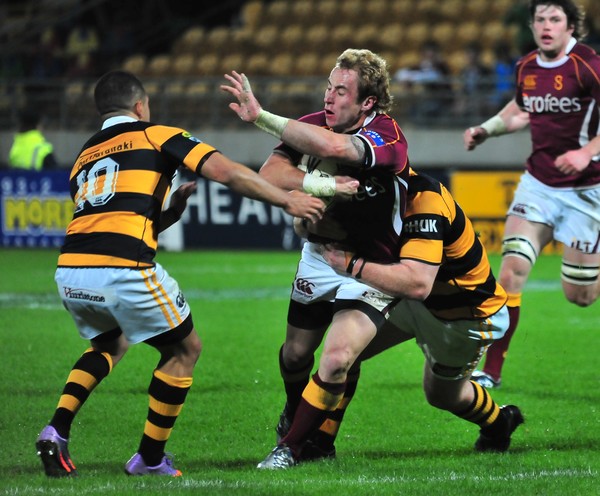 Top of the table Southland playing away against Taranaki in a vital game that Taranaki must win to stay in contention for a Semifinal play off spot.

Southland kicked off and Taranaki took the ball onto attack and after only 3 min the Taranaki pack took control and after some driving forward play the ball was sent through the backs with Jayden Hayward slipping through the Southland defence to score out wide, Willie Ripia converted to give Taranaki the early lead 7-0.

Southland came back at Taranaki and after a ruck close to the Taranaki line they passed the ball through the back line, an attempt to intercept a pass saw Taranaki penalized but the penalty attempt by Southland went wide.
A second penalty to Southland a minute later after some off side play at a ruck gave Robbie Robinson an easy kick from in front
To bring the score to 7-3 to Taranaki.

After 16 minutes Southland conceded a penalty at a ruck to giveTaranaki’s Willie Ripia an easy three points Taranaki 10-3.

Another penalty to Taranaki for offside back play by Southland gave Willie Ripia and Taranaki three more points 13-3.

Leading up to half time Southland were given a penalty, they took the decision to kick for touch and from the line out Taranaki were caught off side. Instead of taking the easy three points Southland again kicked for touch, from this line out Taranaki won the ball and cleared their line. Taranaki went to the break with a handy 13-3 lead.

The second half started with Southland taking the play to Taranaki with the forwards dominating at the ruck this gave Southland
A penalty after the Taranaki forwards came in from an offside position; Robbie Robinson converted to close the score up to 13-6.

In the 53rd minute a Southland mistake gave Taranaki the opportunity to kick the ball through the defence, the chasing Taranaki players looked to be on the way to scoring the try when a Southland player brought down the Taranaki chaser only meters from the line and after consulting the touch judge the referee awarded Taranaki a penalty try. Willie Ripia converted to give Taranaki a 14 point lead.

Southland came back on attack and was awarded a penalty but the kick went wide, from the clearance Southland decided to throw the ball around. After some sustained forward play that looked like Southland would score close to the posts a sloppy pass saw the ball lost forward caused by some determined Taranaki defence allowed Taranaki to clear the ball.

Southland again ran at Taranaki and gained a penalty, with their play not getting the results that they wanted they took the kick at goal but again the kick from Robbie Robinson went wide.

With both teams throwing the ball around the game seesawed back and forth, on the 73rd minute Taranaki got another penalty from
A hand in the ruck, Willie Ripia took the opportunity to extend the lead to 23-6.

Southland were determined to get a try and after some determined running wing Mark Wells ran down the touch line to ground the ball while diving spectacularly in the corner only to have the try referred to the tmo and have the try ruled out with his foot just going into touch as he dived for the line.

This really put paid to any chance Southland had to win the game and after a couple of turn overs near half way Taranaki were awarded a penalty which they kicked to touch to finish the game and take the win 23-6 and hand Southland their first lose of the season. Taranaki now move to third on the points table.