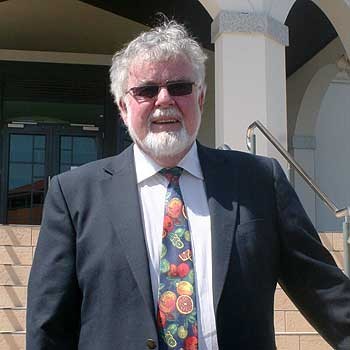 Professor Emeritus Errol Hewett makes a sartorial statement with his fruit-motif ties, which he wears to promote the horticulture industry. CREDIT: Massey University

Professor Emeritus Errol Hewett has been elected to the board of the International Society for Horticultural Science.

His appointment was announced at the society’s 28th Horticultural Congress in Lisbon, Portugal.

One of only four directors on the board, he is responsible for "Innovation, Industry and Insight" – a global role that also covers horticultural interests of Asia, Australasia, Oceania and Africa.

Encouraging more cooperation and interaction between academia, research organisations and the private sector are his global goals.

"Internationally, there is still a disconnect between research and people working in horticulture,” Professor Hewett says. “In New Zealand, there is a good relationship between scientific research, through Crown Research Institutes or universities, and the industry. We have a more dynamic system for adapting new technology and innovations."

He also wants to foster more integration between horticultural researchers, growers, marketers, exporters and even supermarkets, so that consumers have better access to quality fresh produce.

"The basic premise is that horticultural products – fruit and vegetables – are a key nutritional component in human health," he says. “Yet the predominance of calorie and carbohydrate-rich crops such as rice, wheat, maize and other grains, perhaps seen as more crucial for survival in poorer countries, has meant less research funding for fresh fruits and vegetables that also have major health and nutrition benefits.”

He hopes his appointment will also give him an opportunity address the "serious decline" in students enrolling in horticultural science over the last 15 years, both in New Zealand and worldwide.

"A lot of people don't know what horticulture is – there is a gumboot mentality in the way people perceive it," he says. “Beyond digging, planting, pruning and harvesting it is a high technology, science-based industry, with numerous professional opportunities from crop research, growing and production to supply chain management.”

The society is also keen to highlight the many social, recreational, aesthetic, economic and therapeutic values of horticulture in community settings that arise from people growing their own produce and flowers, or enjoying them in parks and gardens, he says.

Professor Hewett, who trained as a plant physiologist at the University of Canterbury and University College of Wales, and worked for Department of Scientific and Industrial Research before coming to Massey in 1986, specialised in post-harvest physiology and technology. His graduate student’s research on the physiology of apple bruising and Botrytis on kiwifruit, led to a better understanding of storage to limit damage, helping to increase profits for growers and exporters. As well as currently lecturing part-time at the Institute of Food, Nutrition and Human Health at the Albany campus, he is interested in exploring how nanotechnology can be applied to horticulture and organised a colloquium on this topic at the recent Lisbon Congress.

Professor Hewett, whose professional interests are reflected in his collection of colourful fruit motif ties – the only kind he wears – has had a 30-year association with the society, including chairing international commissions on education, research training and consultancy, and quality and post-harvest horticulture.

As well as being on the Editorial Boards of the New Zealand Journal of Crop and Horticultural Science, the International Journal of Postharvest Technology and Innovation, and Horticulture, Environment and Biotechnology, he has published more than 150 papers in international journals and was involved in developing a manual of best practice for the stone fruit industry. He is co-editor of FreshFacts, an annual compendium of New Zealand horticultural statistics prepared by Martech Consulting Ltd, and published by Plant and Food Research. He has consulted on horticultural research and development programmes in Pakistan as well as postharvest horticulture in Albania.

Massey University Professor Ian Warrington was made a Fellow of the society at the congress. He has been its vice-president with responsibility for scientific programmes and is currently co-president of the 29th International Horticultural Congress to be held in Brisbane in 2014.