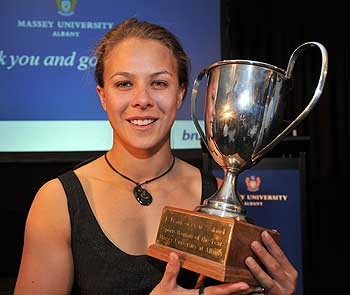 They were chosen from 36 Blues Award recipients from the Albany campus representing 20 sporting codes. Fourteen recipients were unable to attend because they are competing in swimming, cycling and hockey events in the Commonwealth Games in Delhi, India.

Ms Carrington, a second year Bachelor of Arts (Maori Studies and Politics) student from Whakatane, is New Zealand's number one open women's competitor. This year she won gold in the K2 1000m at a World Cup event in France, lowering the world record by five seconds. She also competed in the World Cup series in Slovenia where she finished first in the K2 500m and seventh in the K2 200m final. She says she was delighted to receive the award "in recognition of all the hard work we put in”.

Before taking up competitive kayaking, she did surf lifesaving at Ohope Beach, near Whakatane, and practised surf skiing and sea kayaking as a teenager. She trains intensively three times a day at Lake Pupuke and the Millennium stadium on the North Shore, and says although juggling sport and study is difficult, it gives her a good balance in life.

Flat water sprint kayaker Scott Bicknell, who was unable to attend the awards ceremony, won gold this year in the Oceania Championships K2 1000m and silver in the K1 200m races. A fourth-year Bachelor of Arts student, he also competed in the World Cup series this year, achieving a top-15 in the open K1 200m in France, and a top 30 finish in the Open K1 and K2 200m in Hungary.

Guest speaker Shaun Quincey captivated the audience with video footage and a colourful account of his perilous solo canoe journey across the Tasman Sea. On March 14 this year, the former Takapuna Grammar School student became the first person in the world to row solo from Australia to New Zealand, covering a distance of 3947km in 54 days.

He faced several potentially life-threatening challenges – capsizing twice, running out of water and colliding with a whale. Colin Quincey, Shaun's father, is the only other person to have rowed across the Tasman. In 1977 he did the journey in the opposite direction from New Zealand to Australia in 63 days.