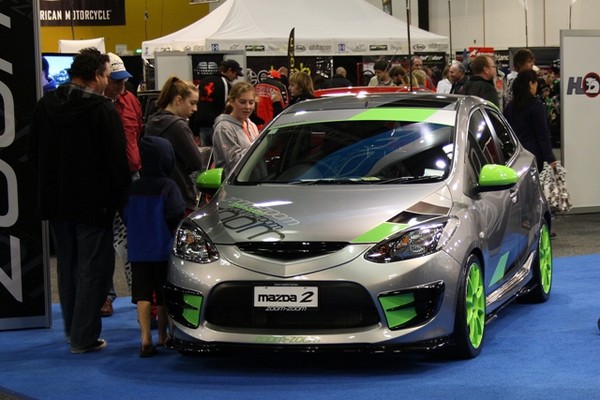 Exhibitors line up for the 2011 edition of Speedshow

More than twenty businesses secured their space at the fifth annual Speedshow within a day of exhibitor details being sent out.

The hugely popular car, bike and motorsport show is scheduled to take place at the ASB Showgrounds in Auckland over the weekend of 23 and 24 July in 2011 and, according to Speedshow developer and organiser, Keith Sharp, as soon as the first booking email was sent to previous exhibitors, bookings started being returned.

“The 2010 show was absolutely fantastic and the feedback was phenomenal, but we want to keep building and improving every show. It’s enormously pleasing to see that our exhibitors are equally excited about the opportunity to be part of the 2011 Speedshow in July,” says the North Shore-based Sharp.

“Speedshow is now the biggest and most prestigious automotive show in New Zealand and it speaks volumes about the show’s appeal to have 25 exhibitors secure their trade sites on the first day we release the 2011 floor plan. Exhibiting companies from the wider automotive, motorcycle and related sectors clearly value Speedshow’s ever-increasing fan-base. In turn, we appreciate the effort that our exhibitors put in to help us create the dynamic and vibrate event that Speedshow has become.”

Mazda New Zealand was one of the first companies to return their 2011 booking. The company’s national marketing manager Glenn Harris says: “Following a very successful event in 2010, we are pleased to confirm our support for the 2011 Speedshow. As was evidenced by the strong growth in visitor numbers and the positive level of enquiry through the Mazda stand, Speedshow continues to grow from strength to strength and has become an important date on the motoring calendar where visitors can taste some of the wonderful vehicles available to them in New Zealand showrooms. We look forward to furthering the growth of Speedshow in 2011 through displaying a number of exciting new ‘Zoom-Zoom’ vehicles that will continue to extend Mazda’s presence in the New Zealand market.”

Just over 20,000 people visited the 2010 edition of Speedshow, an audience figure that pleases Sharp.

“In the current economic climate, the fact our audience has grown each and every year is really significant,” says the former motor racing champion who conceived and put on the first Speedshow in 2007.

“Each year we have had literally millions of dollars worth of cars and motorcycles at the show. From hot rods to speedway racers, new high performance road bikes to rally cars, historic saloons, old and new single seater race cars, dragsters to the replica Indian motorcycles built for the movie ‘The World’s Fastest Indian’.

“At its heart, Speedshow is for car, bike and motorsport enthusiasts. For 2011, we’ll be sticking to our core philosophy that if it’s cool and it’s fast, it’s at Speedshow. We’ve got so many more great people to talk to, stories to share and fantastic bikes and cars to show off. We’re all looking forward to 23 and 24 July in 2011 and opening the doors on another fantastic edition of Speedshow.”

For companies interested in exhibiting at Speedshow in 2011, Sharp says he has a special offer for bookings secured with a deposit before 31 December 2010. Booking and contact details can be found on www.speedshow.co.nz.