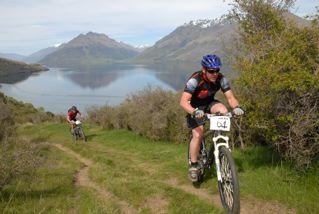 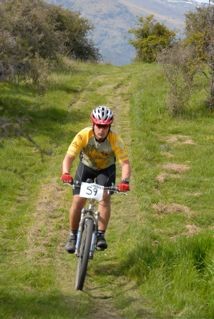 Leading Queenstown multisporter Jim Hawkridge will be on the start line at the Patagonia 8hrs@Jacks mountain bike multi-lap event on October 23 after finishing a close second in the inaugural race last year.

The Southern Traverse event is run on the Straggler’s Loop Track at Jack’s Point resort and involves individuals and teams of two, three and four riders competing on the 8km course, to clock as many laps as possible over eight hours.

“It is an exhilarating course in a fantastic environment and a chance to get a good strong ride in early in the season,” says Hawkridge. “It’s a good race for experienced riders but also for people who are just getting into mountain biking. There’s plenty of opportunity for speed, some good technical sections and the great views certainly get you absorbed as well.”

Hawkridge will compete again on a single speed bike, the only competitor to do so last year. Both he and winner Andrew Ballantyne of Invercargill completed 15 laps with Ballantyne crossing the finish 1min 30secs ahead.

Race Director Geoff Hunt says the track is in good condition. “It’s in good shape for mountain biking although a little damp in some places. Returning competitors will find the same course as last year although there will be gates instead of stiles to cross.”

Hunt says the 8hrs@Jacks was developed in response to a growing demand for a new and different style mountain bike event for elite and recreational riders.

“We think we have got the formula right and the stunning landscape is a drawcard on its own. People can expectto find a relaxed atmosphere at the base with lots of friendly rivalry amongst teams. We’ll have a coffee cart there and MoreFM will be providing the entertainment.”

The prize giving will be held at Jack’s Point Clubhouse following the event.

“There is strong synergy between our brand and 8hrs@Jacks and we are excited about expanding our role with the event this year,” says Patagonia Director Hamish Cochran.