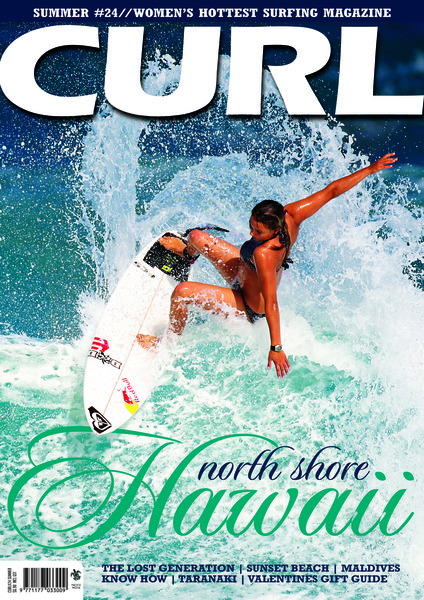 Curl Named Cover of the Year at the Maggies

The January 2010 issue of the women's surf and snow magazine, Curl, has beaten off fierce competition to be hailed as winner of The Maggies: Magazine Cover of the Year. The cover features a stunning image of the world female surfing champ, Sally Fitzgibbons, and beat titles across all six categories, including NZ Geographic, OHbaby! and Healthy Food Guide to be crowned overall Magazine Cover of the Year, as well as winning the Sports category.

Curl's Editor, Lyn Dickinson was thrilled with the award, saying, "It's a huge honour for CURL to win this award considering the quality of the titles we were up against. We are really proud of this cover shot, the image was taken by our managing director and senior photographer, Steve Dickinson, of Sally Fitzgibbons in Hawaii late last year. For me personally it means a great deal that CURL has been recognised, we are a relatively young magazine and this award not only gives credit to our magazine and the incredible photography but also to the quality of women's surfing in general. We are stoked!"

Initiated by online subscription company, iSUBSCRiBE, and sponsored by New Zealand Post, the covers entered in The Maggies were shortlisted by a panel of industry heavyweights, Chaired by Executive Director of the Magazine Publishers Association in New Zealand, John McClintock. This shortlist was then put to a public vote via www.themaggies.co.nz, where over 10,000 votes were cast during a five week period.

Dickinson nominated this cover for the awards because it showed "no Photoshop, no glamour, just girls just getting out there and charging". The judges agreed that the January cover met the shortlist criteria in that it 'possessed a high standard of imaginative design, photography,illustration and sales impact; successfully balanced the image with the coverlines, and encapsulated the brand with something unexpected that grabs the attention of the consumer.'

McClintock said of the winning cover, "Curl's cover has been beautifully executed, combining stunning photography and a single, strong coverline. It ticks all the right boxes. This cover is a classic example of great cover design."

Publishers were encouraged to donate to children's charity, Cure Kids, plus everyone who voted received a $5 iSUBSCRiBE gift voucher, with $1 from magazine subscriptions purchased with this voucher going to charity. Over $5,000 has been raised so far, with this figure set to rise.