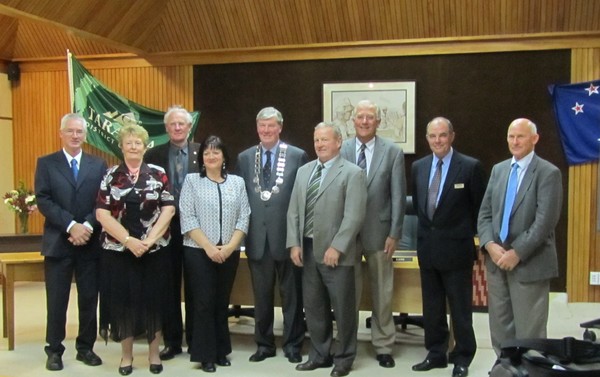 Mayor Roly Ellis and councillors made their statutory declarations to officially take up office
for the next three years at a meeting on Wednesday, 27 October.

Council has determined that it will meet each month on the last Wednesday (except
December) commencing at 1.00pm, with the December meeting to be held on the second
Wednesday of that month.

There are two standing committees, being the Tribunal and Hearings Committee (this deals
with hearings for matters relating to the Resource Management Act, Sale of Liquor Act and
Dog Control Act) and the Chief Executive’s Performance Appraisal Committee.

Bill Keltie was appointed as Deputy Mayor with portfolios for various responsibilities being
assigned as follows:

Other appointments include the Mayor representing the Council on both the Regional
Transport Committee and the Regional Emergency Management Committee, with the
Deputy Mayor to be the alternate representative should the Mayor not be available.