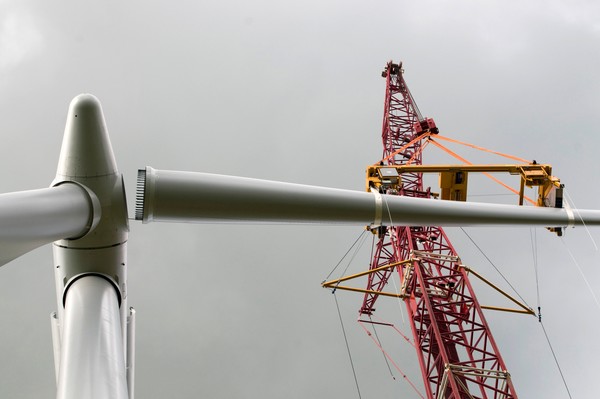 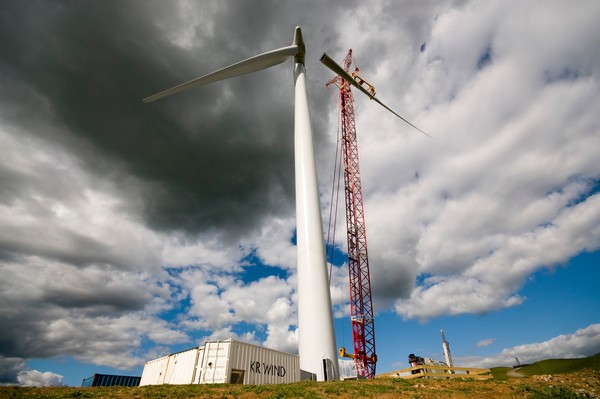 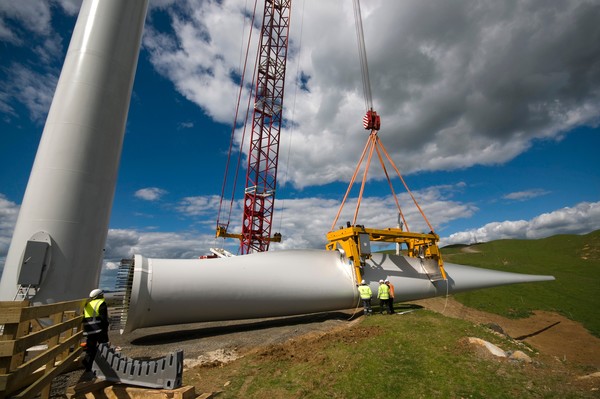 Turbine blade about to be lifted in place CREDIT: Meridian Energy

Construction of the first of 28 wind turbines is underway at the Te Uku wind farm, near Raglan.

The turbines will be constructed with the help of a 600 tonne crane, the largest wheeled crane ever seen in New Zealand.

“The process takes place in three main steps. The first component assembled is the base tower section.  Then the remaining two tower sections, nacelle and hub are lifted into place.

“Finally, each of the three turbine blades is put in place to complete the process,” explains Mr. Batters.

The 600 tonne crane being used to construct the turbines was shipped to New Zealand from Denmark by the KR Wind/NZ Crane Group Alliance especially for the job. It arrived at the wind farm site in mid-October, along with 28 truckloads of associated crane parts. Its boom can be extended to 160 metres, but is configured to 102 metres for the Te Uku turbines.

“Despite its size, the crane only has a width of three metres. This meant we could construct the 26 kilometres of roads on the wind farm site to an absolute minimum width, minimising the environmental footprint on the rural landscape,” says Mr Batters.

The Te Uku turbines were manufactured at two sites – the towers in Korea and the actual turbine componentry by Siemens in Denmark.

This is the second Meridian Energy wind farm using Siemens turbine components – the first being the West Wind wind farm at Makara near Wellington.

Internationally, Meridian has operations in Sydney Australia and San Francisco California. Meridian recently announced the establishment of a joint venture with Australian energy company AGL to build what will be the southern hemisphere's biggest wind farm in southwest Victoria  The 420MW Macarthur wind farm is due for completion in 2013.

Meridian invests strongly in renewable energy development both in New Zealand and offshore and has recently commenced construction on the Te Uku wind farm, in Hamilton, New Zealand.