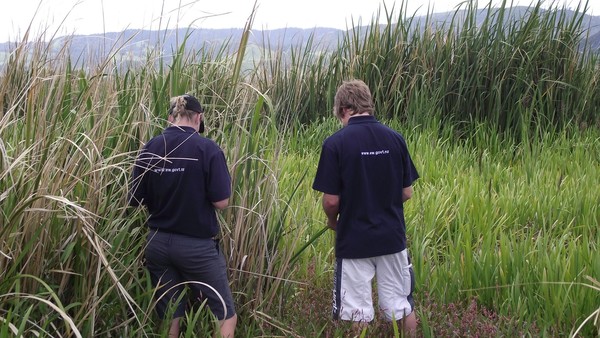 The hunt is on in Hauraki for the “national interest pest” plant Manchurian wild rice.

Environment Waikato is employing a number of students over summer to shortly start looking for Manchurian wild rice in various parts of the Hauraki district.

The main problem area is at Turua, along the banks of Waihou River, with small scattered patches also along the Piako River.

If it is found, EW will carry out control work funded by MAF Biosecurity New Zealand.

Manchurian wild rice is of national concern and is targeted for eradication in the Waikato region.

Manchurian wild rice is native to Asia. It was accidently introduced to New Zealand from ship ballast water dumped into the Wairoa River in Northland around the turn of the last century. The Waikato infestation occurred as a result of deliberate plantings as it was thought at that time to help prevent erosion of river banks – it is now known that is not the case.

It is a very tall perennial grass, growing up to three metres high. However, up to 80 per cent of the plant biomass is under ground where the woody rhizomes form a dense mat.

The weed forms dense colonies in swampy areas. It can take over and displace native wetland plants, block drainage, break up stop banks and increase flooding.

Leaves are dull grey-green with a stout mid-rib that tapers to a sharp point and the plant can be confused for the native raupo. However, raupo, unlike Manchurian wild rice, dies down over winter and the leaves do not have a mid-rib. Raupo has a distinctive long brown flower spike which releases fluffy seeds. Manchurian wild rice has grass flower and seed heads.

Anyone who thinks they have Manchurian wild rice on their property can call EW Biosecurity on 0800 BIOSEC (246732) to have it removed.

For more information go to the number above or visit www.ew.govt.nz/mancuhrian.