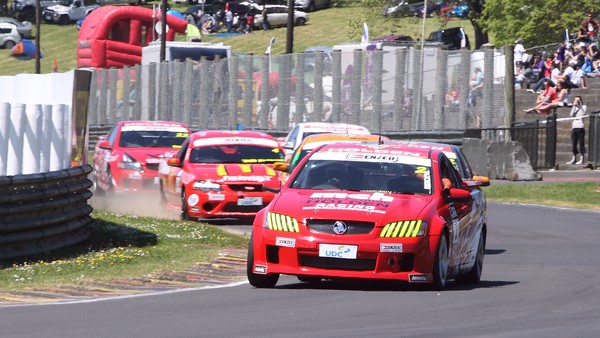 Lobb Up Against it to Retain Series Lead

Current points leader in the ENZED V8 Ute Challenge Caine Lobb will be up against it this weekend after new rules aimed at the Holdens have created a dramatic loss of performance in the Mark Cromie Holden Racing ute.

Leading the series after a blistering opening round at Pukekoke Park Raceway earlier this month, Lobb's race car and the other Holdens in the field have been subjected to a reduction in the size of the air intake on the throttle body prior to this weekend's round two.

The restrictor added to the air intake on the Holdens has brought a fairly extreme decrease in performance according to Lobb after a track test. The Holdens have also been fitted with new controlled suspension and brake parts.

"We tested at Taupo with the new parts and we were down around eight tenths from our best time around there. I really notice the difference down the straight that's for sure." said Lobb today.

The Powerbuilt International Raceway at Ruapuna is a very technical circuit and with the Ford being the most nimble of the two race chassis in the V8 series the weekend's outcome could be very interesting.

"It's a bit of a grunt track and every bit of horsepower helps there. We had a slight power advantage over the Fords but they will have that now as well as the handling advantage they already had. But we will have to just wait and see what happens this weekend, you never know for sure until you get into the racing." he said.

At the opening round of the series at Pukekohe, Lobb stormed to lead the series with a third place followed by two race wins. In second place overall was the Ford of Simon Beirne then Chris Hanley in a Holden and Chris Pither in another Ford.

Last season Lobb in a Holden was runner up to Palmerston North's Chris Pither in a Ford.

Lobb leads with 277 points to Christchurch's Simon Beirne in second place with 241. Auckland driver and rookie Chris Hanley is third with 227 while Chris Pither from Palmerston North is fourth with 206.