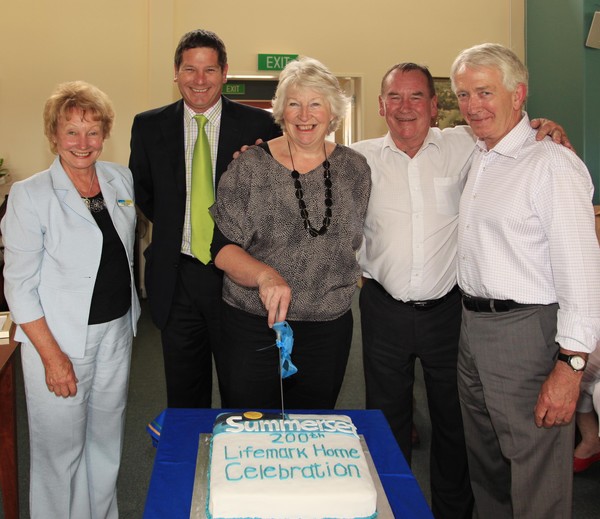 Summerset Retirement Villages has demonstrated its commitment to Lifetime Design with the completion of its 200th Lifemark home.

Consumer advocate David Russell presented a Lifemark certificate to Jude Keown, daughter of homeowner Aileen Harper, at Summerset by the Lake in Taupo. The Lifemark ambassador and former head of the Consumers’ Institute was joined at the ceremony in Wharewaka Road by Rick Cooper, Mayor of Taupo.

The building sector’s equivalent to Tourism New Zealand’s Qualmark, homes awarded the Lifemark have 33 design features including a level entry, widened doors and passageways, all aimed at making the house accessible for everyone and easy to adapt as residents’ needs change over time.

Research by the Ministry of Social Development shows that the housing sector could save up to $60 million a year by choosing this new design and build approach for new housing.

Andrew Olsen, general manager of Lifetime Design, which administers the Lifemark, said: “Summerset is committed to designing and building homes that are fully accessible and useable by all people including friends and family who visit. It’s evident that a cultural shift is occurring and while transforming New Zealand’s housing stock is a long-term process, the change has started. I would like to think it will be just part of the way we do things in New Zealand.”

Norah Barlow, chief executive at Summerset, said: “Summerset was the first retirement village operator in New Zealand to be awarded the Lifemark and we are of course delighted to reach this important milestone at Summerset by the Lake. Lifemark offers new retirees additional peace of mind about their lifestyle investment. There are very few “old people” in our villages, but there are many senior folk getting the very best out of life with Lifemark helping them get the best out of their homes, too.”

David Russell added: “My congratulations to the Summerset and Lifemark teams. Summerset identified early on the need for, and the benefit of, the Lifemark. Designing homes to last a lifetime is crucial because the demand for housing suitable for all ages and all stages of life is set to rise significantly over the next 30 years as the population ages.”

Summerset’s recent work in developing high quality retirement housing has been recognised at an award ceremony honouring the best providers in the industry.

The company has recently won a top accolade at the 12th Australasian Over-50s Housing Awards at a ceremony held in Melbourne, Australia, on 5th November 2010 for its ground-breaking work in the sector in recent years.

Summerset won the highest award in the "Most Outstanding Retirement Village Management Company in Australia and New Zealand 2010" category, beating off competition from numerous other organisations in the sector.