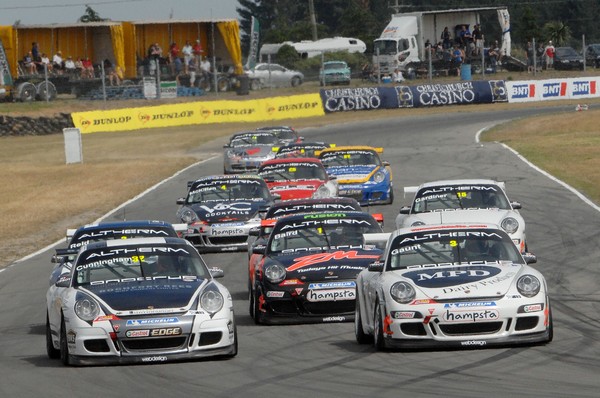 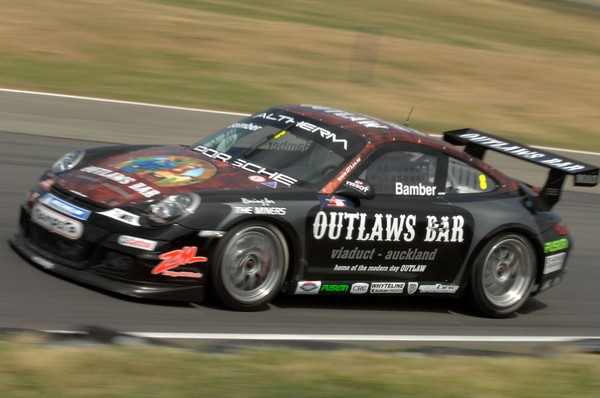 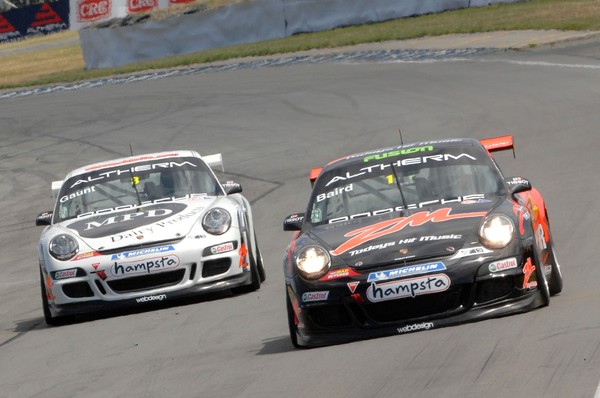 Winning three from three races at this weekend’s second round of the New Zealand Porsche GT3 Cup Challenge near Christchurch has extended the title points lead held by the Triple X Motorsport driver Daniel Gaunt.

Now with a 52-point advantage, Gaunt, driving the MPD - VnC Cocktails Porsche 997, has won five of the six races contested so far of the six-round season. Setting fastest in qualifying, the 25-year-old Auckland based driver was never matched around the 3.33 kilometre Ruapuna circuit despite the searing conditions.

“Dealing with the heat, and breathing, they were some of my biggest challenges during the races,” said Gaunt. “It seems stupid, but they are crucial to that top couple percent of performance. With the Porsche car it’s a sealed unit – there is no air coming in, none going out – you sweat from areas of your body you didn’t know could sweat.”

“The first round I was very lucky. Lucky Michael Morton let me use his car, and that Craig Baird got the puncture and I inherited the first race win of the season.”

“This weekend I certainly ramped it up. I came in to it wanting to stamp my authority on the championship – to be a serious contender – that was my goal. It certainly puts me in good stead for the rest of it. Although I can never count out Craig or Jonny (Reid), they’ve had bad rounds and I’ve got to keep making sure I have only good rounds.”

With a ten lap race this morning, Gaunt again stormed to an unmatched lead, while defending series champion Craig Baird languished even further when he punctured during a passing move. The Gold Coast based Kiwi again suffered when he punctured the radiator of the Mad Butcher ZM Porsche 997 at the third turn in the final race. Baird now drops to sixth in the standings.

Series debutant and saloon car rookie Earl Bamber had a further rise in performance by finishing third successively in the morning and afternoon races.

“It’s a fantastic achievement and to even be racing this weekend after arriving not expecting to be driving a car. A big thanks to Michael Morton, Shane McKillen and the Triple X Motorsport team to give me the opportunity and support me,” said the 20-year-old.

“There are a lot of very very quick guys up front so to be near them so early has been a real thrill - I can’t believe it really. Certainly the experience from driving single seaters and a test in a DTM car gave me a good feel for the Porsche – which is a real race car.”

“Now it’s a case of laps, learning how to get the last little bit from the car and improve even more.”

Fourth for the final race and the weekend, Hugh Gardiner mixed up the field with fierce duel with his Triple X Motorsport team-mates that dominated the opening laps of the final race. Driving the Gardiner Motorsport Porsche 997, the 28-year-old Aucklander never made it three from three after having to sit-out the first race round earlier in the month.

Whangarei’s Scott Harrison moved up the championship standings to fourth overall, despite not finishing the opening race on Saturday afternoon. Starting down the order for the first Sunday race, Harrison in the Mad Butcher Carpet One Porsche 997 ended his weekend with a pair of fifths.

Team principal Shane McKillen again battled for track position, especially when awarded pole position for the top-six reverse grid final. Finishing seventh he has climbed the championship ladder to now place fifth after the second round.

Dropping the team to six cars for the day, Christchurch businessman Paul Kelly was forced to retire from the meeting following Saturday’s race. In preparation for the Sunday’s racing a mechanical fault was discovered that necessitated an engine change in the Paul Kelly Motor Company Porsche 997.

Re-grouping before the half-way mark of the season, the team will take all seven cars back to Auckland to prepare for the series third round in mid January 2011. To be raced at Teretonga, south west of Invercargill, the southern journey is the first of two in two weekends, with the fourth round contested at Levels near Timaru a week later.