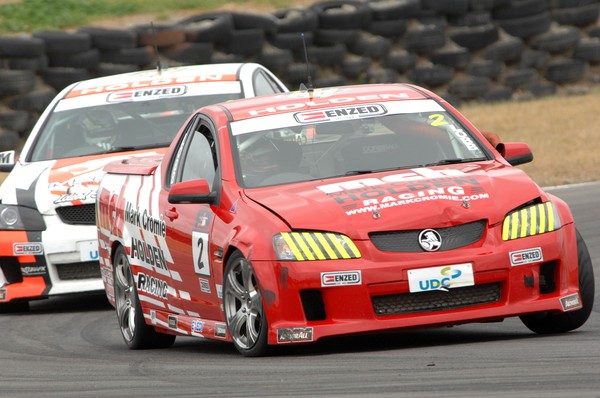 Heading to the second round of the ENZED V8 Utes Challenge at Powerbuilt International Raceway Ruapuna it looked as though Whangarei driver Caine Lobb had a very tough battle on his hands.

Armed with a lesser than optimum race car against defending champ Chris Pither the racing was always going to be hard and close with Lobb at a predicted disadvantage since the opening round at Pukekohe Park Raceway earlier in the month.

Airflow restrictions placed on the Holdens in the field to adjust parity between the General and the Fords saw a loss of up to eight tenths of a second per lap in pre-race testing for Lobb's car.

However it was the defending champion who suffered ill fate when in the opening race due to a mechanical failure he fell by the wayside allowing a pursuing Lobb take the lead.

Both Lobb and Pither narrowly avoided major carnage at the first corner of the race involving several cars but it was Lobb who went on to win the first race of the weekend after Pither's unfortunate demise.

In the second race it was Simon Beirne's turn to take the lead and he held on to it tightly as Lobb made his way up through a start position amongst the pack. The marble drawn reverse grid awarded Lobb with a tough starting position however he managed to progress through to third place by the chequered flag.

Lobb finished behind Mike Lightfoot and ahead of Pither who started from the pit lane to place fifth.

Race number three gave the drivers the opportunity to start on the grid according to their accumulated race points which saw Lobb and Beirne lined up next to each other on the front row. However it was Lobb who got the jump on his adversary and throughout the race pulled a major lead ahead of the field becoming almost a carbon copy of Pukekohe three weeks prior.

The carbon copy race included further detail as once again the safety car was called out allowing Pither once more to get on to Lobb's tail for the restart. Although managing to hold off Pither at Pukekohe, this time it was to be different with Pither able to clear Lobb and steal the lead and race win.

Lobb brought the Mark Cromie Holden ute home in second place but took the overall win for the weekend and an extended lead in the series of 43 points over second placed Simon Beirne.

"I was about three quarters of the length of the pit straight out in front and the safety car came out and let Chris catch up and then he got past and won the race. He never would have caught me otherwise." said Lobb.

Lobb now leads the ENZED V8 Ute Challenge with 546 points to Christchurch's Simon Beirne in second place with 503. Auckland driver and rookie Chris Hanley is now fourth on 395 after Chris Pither from Palmerston North moved up to third with 405.

"We have a good lead at this stage and just really need to keep an eye out for Simon (Beirne). We could possibly finish behind Chris (Pither) for the rest of the season and still win the title and really it's ours to lose from here - we don't want to speak too soon there's a long way to go." said Lobb.

The series takes a break over the Christmas period but continues the South Island leg with round three at Teretonga Park Raceway Invercargill over the weekend 14-16th January 2010 followed immediately with Timaru International Motor Raceway on 21-23rd January.