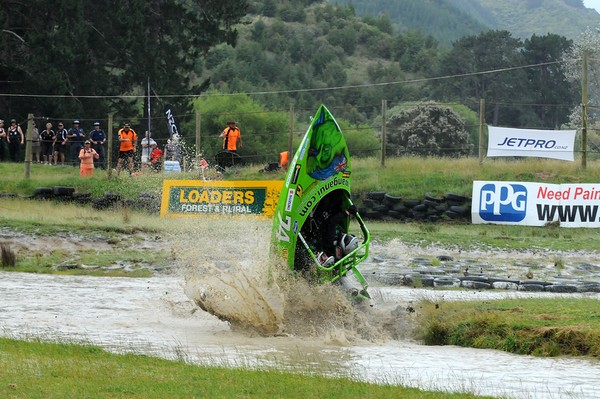 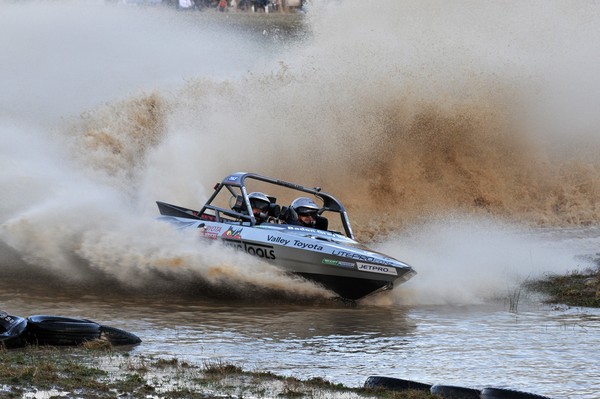 Action fans will again be heading to Wanganui for the post-Christmas activities that include the first round of the V8 powered jet sprint boat series starting on 27 December.

Held the day after the annual Boxing Day motorcycle racing, the jetsprint fixture adds to the regions speed theme with the V8 powered boats having to negotiate a tight and permanent water-course.

Located at the Shelterview Raceway, eight kilometres north-east of Wanganui near Upokongaro, the purpose-built venue utilises the surrounding amphitheatre hillside to provide elevated views for spectating families and social groups.

Expecting 30 teams to start the first of six rounds on the 2011 championship calendar, each boat carries a driver and navigator who race a pre-determined course from memory against the clock.  It’s the ever present chance a team will make a mistake or succumb to mechanical failure that keeps the crowd and crew in anticipation of the result.  Needing pin-point accuracy to navigate the narrow channels and varying degree turns, the pressures add to the chances spectators will see spectacular spills.

Teams are divided in to one of three competition categories: Jetpro Lites, Scott Waterjet international Group A and Suzuki Superboats.  Each category is separated by engine specification, starting with a carburettor restricted 412 cubic inches in the Jetpro Lites, through to methanol fuelled super-charged powered Suzuki supported Superboats.

Of the contenders and defending champions returning, last season’s close competition left no clear favourite across the categories.  And with the announcement Suzuki Superboat winners Richard Burt and Roger Maunder of Palmerston North will be stepping aside for the interim, the unlimited formula of familiar faces will have a new leading duo.  Behind the two-time champion there were three teams all within two points of finishing second:  Wanganui’s Pat Dillon and navigator Steve Edmonds, Leighton and Kellie Minnell, and Duncan Wilson with navigator Jamiee-Lee Lupton.

“We got the crowd pleaser award and 2NZ from last season, obviously it’d be nice to go for 1NZ – but that’s a big ask,” said Dillon ahead of the season opener.

“We’ve been developing a new jet unit – a Hydropump, which we will believe will help us a lot, although we’ve got a bit of fine-tuning to do with it.”

Reinforcing the volatility of championship competition, Scott Waterjet Group A team of Auckland’s Baden Gray and Tanya Iremonger were pipped of an almost certain title by defending champion’s Bevin Muir and Kathy Barker from Thames.  Sharing the same boat, the duel duo, with marital ties, had their championship placings reversed at last season’s final round when Gray missed the title cementing points in the early elimination runs.  While each has the same aim, their rivalry continues to feed the field of 15.

Entry category; the Jetpro Lites will also crown a new champion this season, with back-to-back title holder David Stone and Steve Greaves from Bulls stepping aside.  Last year’s rookie’s Karl and Scott Draper are the highest ranked team returning, with a total of 11 entered for the title this coming season.

Starting at 11am on the Christmas day holiday morning, the teams each get a familiarisation run before four timed qualification sessions.  Resuming after the lunch-break, the top times run through a series of eliminations, starting with the top-16.  A further three runs will decide the final three who will run-off for the day’s podium decider.

Tickets can be purchased at the gate or online www.v8jetsprints.co.nz  $20 adult, $5 for children 5-12years and under 5 free.  Being a farm location there is a no pet policy.

Again televised, the Wanganui event and Jetpro jetsprint championship will have delayed coverage repeated on the Sky TV network during the year.