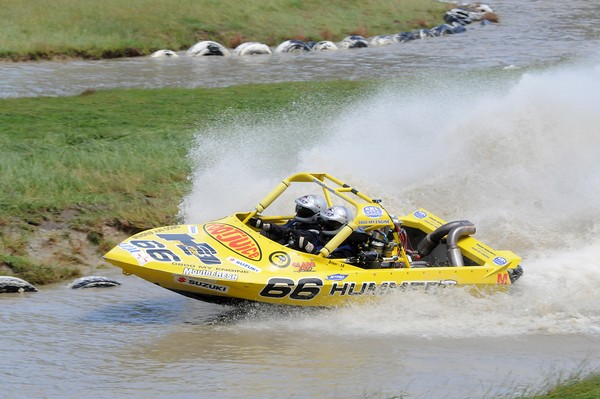 Wanganui's Leighton and Kellie Minnell eclipsed the competition, setting fastest times to take an early lead in the 2011 Jetpro Jetpsrint series after the first round held near Wanganui today. CREDIT: Ian Thornton 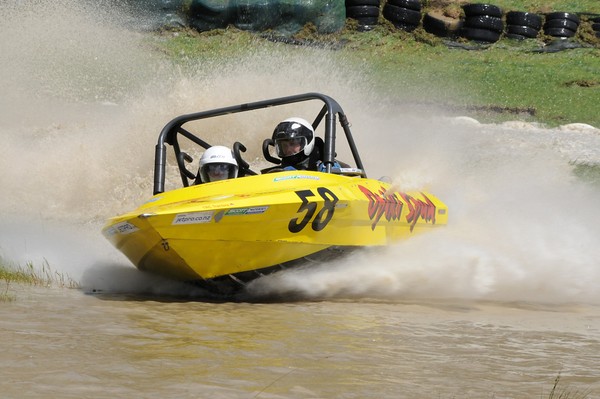 Thrilling the crowd with top-times, Palmerston North's Simon Campbell and navigator Suzanne Shirtliff have taken an early lead in the Scott Waterjet Group A category after today's first round of the 2011 season held near Wanganui CREDIT: Ian Thornton 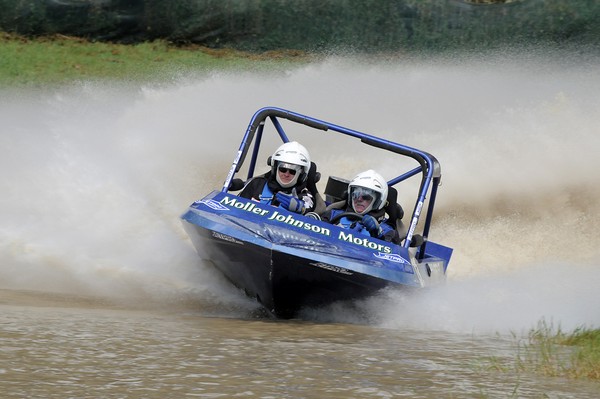 Stratford's Graeme and Scott Jones have taken the lead in the Jetpro lites category of the 2011 Jetpro Jetpsprint series after today's opening round held near Wanganui. CREDIT: Ian Thornton

Wanganui husband and wife pairing of Leighton and Kellie Minnell set fastest time at today’s opening round of the 2011 Jetpro Jetsprint championship held on the outskirts of their river city.

Driving the Chevrolet powered ‘Hummertime’ boat in the Suzuki Superboat category, the pairing were head and shoulders above the rest of the competition, who at times struggled in the searing conditions.

Intending on doing two of the six rounds in this summer’s championship, Minnell headed to the Upokongaro venue unsure how the boat would run after not having done any pre-season preparation. Due mainly to spending 11 months of his year organising the annual Boxing day motorcycle race event.

“It came down to if the engine kept going,” said Minnell. “The biggest thing is reliability with the 500 cubic inch engine, it’s either a ticking time-bomb or it goes really well. Ultimately it was a great result for the team – all in all – a great day’s racing. Plus it’s looking like it will be a good series. Peter Huijs, Rob Coley, Pat Dillon and great to see Duncan Wilson back. I see the championship as a tight battle and our 500 is a good competitive package.”

Ever improving during the day, fellow Wanganui local Duncan Wilson and navigator Jamiee-Lee Lupton finished second fastest and second in the Suzuki Superboat category. Third was another Wanganui pairing – Pat Dillon and navigator Steve Edmonds, improving their times in the super-charged Ford, having fitted a new style jet-pump unit.

Driving the ‘Opiki Spud’ boat in the Scott Waterjet Group A category, Campbell has a new engine combination – but is unsure if he will be able to complete the entire season:

“We had a good day – it really was the ideal way for us to start. We’re here to see how it goes at the moment as we’re a bit undecided on what we’ll do next. We’re just sticking with what we know is working, although we’re having to re-tune the jet unit to the new engine.”

Taupo’s Reg and Julie Smith continued their ever consistent theme – finishing second for the day in the ‘Glasspro’ Chevrolet powered Scott Waterjet Group A boat. Their best time of 52.12 seconds kept them narrowly ahead of last season’s class leader – Auckland’s Baden Gray and navigator Tanya Iremonger, who finished third.

A strong field in the entry Jetpro Lites category was eventually headed by Stratford’s Graeme and Scott Jones. Driving the ‘Excaliber’ Chev, they finished over a second ahead of second placed Bevan Linklater and navigator Malcolm Ward from Wanganui. Third was Lower Hutt’s Mike and Gina Oliver.

With teams now catching up on the Christmas break, the series second round heads to the east coast for a twilight meeting at Gisborne’s Electrinet Thunderpark on 5 February 2011.
Again televised, the Wanganui event and Jetpro jetsprint championship will have delayed coverage repeated on the Sky TV network during the year.

Full results will be available shortly on the www.jetpro.co.nz website.