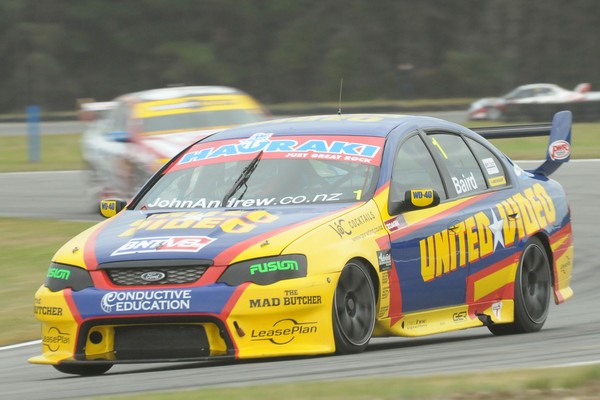 Current New Zealand V8 champion Craig Baird from the United Video Racing team triumphed in challenging conditions at Teretonga near Invercargill to win the third round of the championship season this weekend (14 – 16 January 2011).

Now the series leader after the third of seven rounds on the 2010/2011 BNT V8s championship calendar, Baird started the southern weekend by setting second fastest time in qualifying before Sunday’s three race programme.

Headed in the opening race to finish third, Baird went one better in the second race, to start from 17th in the reverse-grid final. Varying weather conditions turned to consistent rain for the late afternoon race, with Baird needing to finish if he were to maintain his top-tier championship placing.

Swathing a path through the field in the incident free finale, Baird was up to third position by mid-race, eventually finishing second. His consistency was rewarded by moving ten points clear at the top of the leaderboard.

“The wet probably helped us a little bit,” described Baird of the wet final race that sealed his standing.

“Having done the wet race in the Porsche just before the V8 race gave me a few runs on where to search out for some grip – which helped in me taking some lines many didn’t expect.”

“But to now have the series lead is great reward for the United Video Racing team; it wasn’t the most perfect weekend, but taking things race by race, we’ve ended up in a similar position to last season when I took the title.”

Baird and the United Video Racing team get to repeat their efforts next weekend with the series fourth round being held at Timaru’s Levels Raceway (21 – 23 January 2011).