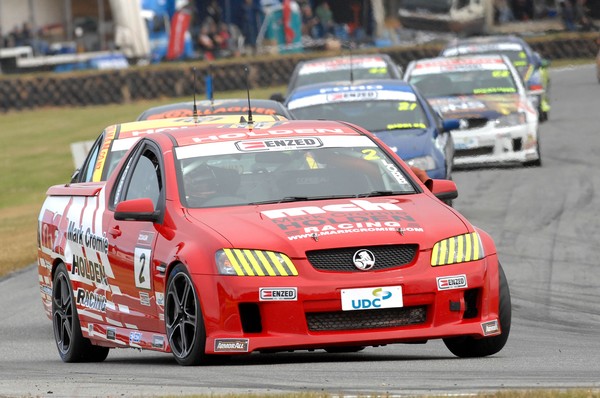 Caine Lobb stays on top after yet another strong round of V8 Ute racing this time at the popular Teretonga Park Raceway at the weekend. CREDIT: SportProMedia.com

With the christmas decorations packed away and New Year's festivities now but a faded memory, Whangarei driver Caine Lobb resumed his pursuit of a second title in the ENZED V8 Ute Challenge at the weekend.

Motorsport New Zealand's Premier Championship Series headed to the world's southernmost race circuit the Teretonga Park Raceway, Invercargill for the continuation of their season where Lobb set forth to maintain his lead in the V8 Utes gained in the opening two rounds prior to Christmas break.

Setting the Mark Cromie Holden Ute afire in the opening round at Pukekohe in November Lobb took an early lead over defending champion Palmerston North's Chris Pither. Following up with another stunner at Ruapuna later that month Lobb extended his lead over the field with second placed contender Simon Beirne from Christchurch 43 points distant and Pither 141.

This weekend at Teretonga saw Lobb further extend his lead after three strong race finishes awarded him with second overall at the meeting extending his gap over Beirne to 65 points.

Not all went his way or came easily for the 23 year old Northlander with a nail biting start to the weekend in race one.

"The first race I started in 11th because of the marble draw and in the third lap I went off (the track) and came back on about 100 metres behind the last car. I worked my way up and there was a safety car which worked in my favour and I came fifth in that race which I was really happy about." he said.

Lobb was later promoted to fourth place in the first race when another competitor was given a time penalty post-race.

Lobb placed second in both race two and three.

The series heads to Timaru International Motor Raceway this weekend along with Motorsport New Zealand's other Tier One race classes including the BNT V8s and Porsche GT3.

"We have testing Thursday, Friday and racing Saturday, Sunday. I'm looking forward to this weekend because I like the Timaru track. I've had good results there in the past and we will just be looking for good results from now so we can stay in the lead." says Lobb.

Halfway through the six round season already, another strong result at Timaru this weekend will have Lobb in good stead for his achieving a second title in the ENZED V8 Ute Challenge.

With Manfeild Autocourse in February and Taupo Motorsport Park in March between Lobb (on 848 points) and the trophy it will all be about finishing as far up the front as he can and staying one step ahead of second placed driver Simon Beirne (783) and defending champion Chris Pither in third (750).

The ENZED V8 Ute Challenge gets underway this weekend with practice sessions on Thursday and Friday followed by qualification Saturday morning then Race One in the afternoon. The action continues with Race Two on Sunday morning at and Race Three that afternoon.