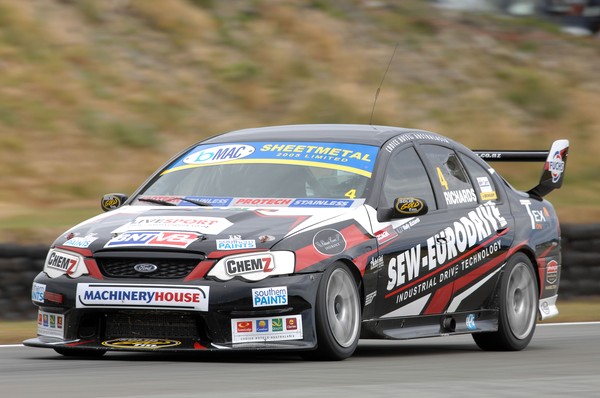 Hamilton driver Simon Richards heads to the Timaru International Motor Raceway this weekend aiming for quick pace again in the SEW Eurodrive Ford and with his eyes set on a repeat of last year's qualifying for Saturday's Top 10 Shootout.

This time last year when the BNT V8s visited the southern Canterbury track he laid down the ninth quickest time setting himself up for a strong grid position for the weekend's opening race.

"A good qualifying result will set the scene for the weekend, that's all it comes down to, being up there in that qualifying session." said Richards.

The tight circuit always brings with it exciting and aggressive competition which in turn attracts large enthusiastic crowds of spectators year after year.

With the forcast suggesting some light rain over the weekend the action will be in plentiful supply with damp conditions putting all drivers to the test and bringing with it less predictable results than usual.

Last year a strong effort in the opening race from Richards in the SEW Eurodrive Ford saw him move up from the rear of the pack to finish in 11th place after the much publicised controversial re-start knocked him out of a track position of fourth place.

A downpour at the start of that race caused confusion then chaos as the officials red flagged it after a serious incident only to re-start the race again with the cars out of, what the majority of drivers considered to be, the correct grid order.

Richards will be looking for a repeat of that qualifying result and to capitalise on it for strong race results with hopefully no repeat of last year's confusion.

Prior to Timaru and just last weekend was round three of the Motorsport New Zealand Premier Championship Series where the BNT V8s competed at Invercargill's Teretonga Park Raceway kicking off the proceedings for 2011.

With Richards and the Ballistic Motorsport Team having much support at this circuit from local businesses and residents the hospitality tent was in full swing with guests availing themselves of the trackside entertainment, food and refreshments.

Richards had two good drives in Sunday's first two races placing 14th and 17th but with the afternoon came rain and slippery conditions for the final race of the weekend at the Teretonga circuit.

A bold move from John McIntyre against Richards at turn one in the final race of the weekend saw a coming together of the two drivers with McIntyre going off the circuit and Richards unfortunately penalised by the officials.

"I had a good run in the first and second race against some other drivers and then had to serve a drive through in the final race. McIntyre was trying to get past me on the outside of turn one and you don't want to go around anyone on the outside there especially in the wet. A desperate man making a desperate move." said Richards.

Richards finished in 17th after the penalty.

This weekend of racing from the BNT V8s at the Timaru International Motor Raceway starts on Saturday with practice and qualifying sessions plus the Top 10 Shootout in the afternoon. The three races are all held on Sunday with same day viewing on TV3.