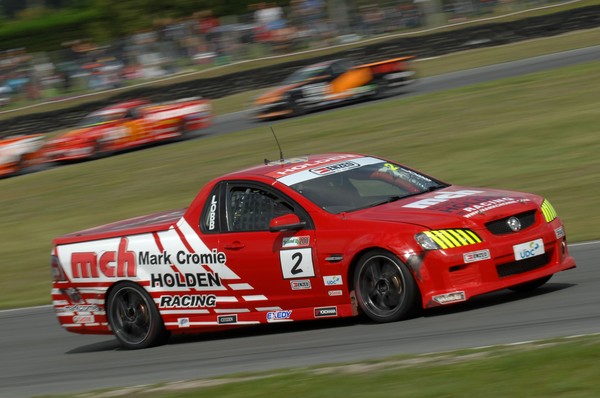 After this weekend's round win at Timaru Caine Lobb has claimed three rounds from four as his own in this season's ENZED V8 Ute Challenge and now leads by an astounding 104 points. CREDIT: SportProMedia

A third round win from four by Whangarei's Caine Lobb pushed his lead in the ENZED V8 Ute Challenge to a staggering 104 point space between himself and closest rival Simon Beirne of Christchurch after an exciting weekend of racing at the Timaru International Motor Raceway.

Ute Challenge Champion of 2008-9 Caine Lobb kicked off the weekend with rockets blazing earning bonus points qualifying in second place behind defending champion Palmerston North's Chris Pither on Saturday. This was to set the two champs up for what was to be later described by Lobb as his "most enjoyable race" in the series to date.

With a marble draw determining the grid positions for race one Lobb started the opener in fourth on the second row and quickly assumed control of the race putting the Mark Cromie Holden across the finish line with a dominating lead over the field.

On Sunday for the second race the start order was reversed placing Lobb near the back of the field challenging him to move up through the pack and get as close as possible to rival Pither whose turn it was to start near the front.

Lobb climbed up through the Ford and Holden rampage that is V8 racing on the tight and narrow circuit at Timaru eventually crossing the line in a very creditable third place only to be promoted to second after a time penalty was later handed to the driver in front of him.

But it was the third and final race which had the audience on their feet as Caine Lobb marched off from pole position to take the lead ahead of Pither holding off numerous attacks from him at the points of the Canterbury track where the Fords had been quick all weekend.

"It was an awesome race, it was mean and probably the most enjoyable one I have had in the utes. Chris was getting right up behind me in some places and then I would pull away in others. There are places where the Holdens are quicker and others where the Fords are so we were just having this concertina race."

The two swapped positions a few times to the crowd's delight but Pither eventually pulled off a run on Lobb entering the sweeper. The action soon transformed into a three way battle which now included another Ford, piloted by second placed driver in the series Simon Beirne who had caught up while the pair battled.

"I found myself in a Ford sandwich but it was such a cool race and although Chris eventually won it I really don't mind I had so much fun." said Lobb.

Lobb crossed the line less than half a second behind Pither and attesting to the closeness of the battle were the race laptimes where Lobb's fastest was 0.001 behind that of his rival's.

With Lobb claiming two second places and a race win he earned the overall victory for the weekend and a points haul which has near doubled his lead in the series to 104 points ahead of Simon Beirne and 142 in front of third placed Chris Pither who remains plagued by mechanical woes.

The Mark Cromie Holden Racing Team, Caine Lobb and the ENZED V8 Ute Challenge series take a short break before unpacking the transporter once more this time in the mighty Manawatu for round five at Manfeild Autocourse over the weekend of 11-13th February.

Round six follows a month later moving north to Taupo Motorsport Park 11-13th March and a seventh round has been added with the ENZED V8 Ute Challenge battling it out between the unforgiving concrete walls of the ITM 400 Hamilton Street Race April 15-17 alongside the Australian V8 Supercars.