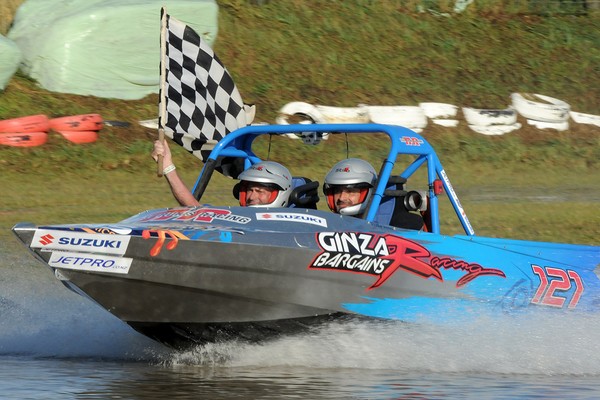 Rotary engine power elevated Wanganui's Peter and Gary Huijs to the top of the Suzuki super boat podium and overall standings in today's second round of the 2011 Jetpro Jetsprint Championship held near Gisborne CREDIT: Ian Thornton 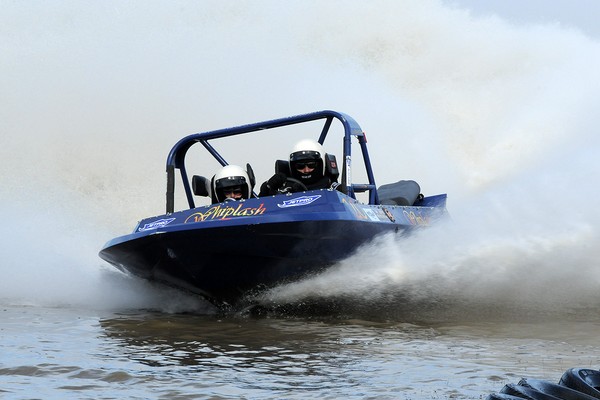 Adding to the action and surprise upsets, Whangarei's Denis and Jo Crene took overall honours in the Jetpro Lites category for today's second round of the 2011 Jetpro Jetsprint Championship held near Gisborne CREDIT: Ian Thornton 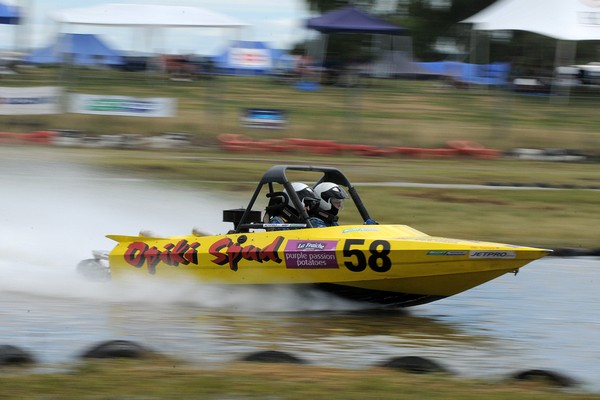 Winning the Scott Waterjet Group A category and setting fastest time overall for today's second round of the 2011 Jetpro Jetsprint Championship held near Gisborne has given Palmerston North's Simon Campbell and navigator Gareth Cox a greater lead in the t CREDIT: Ian Thornton

Wanganui’s Peter and Gary Huijs claimed an upset win in their quad-rotor turbo-charged jet sprint boat in Saturday’s 5 February second round of the 2011 Jetpro Jetsprint Championship held near Gisborne.

Contested at the Electrinet Thunderpark, Huijs was the draw card for the east-coast event and thrilled an action charged crowd with his reliable performance. Searing weather conditions slowed proceedings as the 30 competition teams struggled for composure under their multi-layer fireproof overalls, ultimately creating spectacularly tight racing.

“We are absolutely thrilled of course; our intention was to get on the podium somewhere along the line, but to actually do better than that and win is as good as it gets. Unfortunately there wasn’t much competition left, the V8’s had troubles, whether it was because of the heat I’m not too sure, but our rotary was obviously more reliable,” said Huijs amidst post-event celebrations.

“It was really really hot today. In the (land) bowl where we race there is no wind or anything, so the temperature is about five-ten degrees higher than the surrounding area. And that makes quite a difference with our type of motor – having the turbo charger on it. So reliability is a huge issue. There is only six rounds in the series so for the huge amount of pressure we put on the engine to run flat-out for one minute – is huge.”

In a sport dominated by V8 powered boats, Huijs departure from the norm has illustrated the need for reliability in chasing for championship points. With 56 points and the series lead in the Suzuki super boat category, Huijs head’s off previous leader Leighton and Kellie Minnell who succumbed to head gasket failure in their boat early in the day.

Second placed for the round, Rotorua’s Nick and Richelle Berryman have shot up the standings to trail Huijs by a mere two points. After the main competition had eliminated themselves in the earlier heats, it was a case of first finishing for the remainders. And that included Lower Hutt’s Brent White and navigator Morris Edwards, who spectacularly jumped from the track, gaining altitude from the tyre protection bundle before landing safely.

Of the boats that eliminated themselves through either mechanical failure or departure from the track, Campbell’s category provided the closest racing. Dominating for much of the 2010 season, Auckland’s Baden Gray and navigator Tanya Iremonger couldn’t quite match the cool precision of Campbell in the top-three final. Taupo’s Reg and Julie Smith were again left to claim what was left in the final run, third place tying him on points with Gray, three behind Campbell.

Continuing the theme of upsets experienced by the unlimited category, Whangarei’s Denis and Jo Crene took the round win in the entry-level Jetpro Lites class. Setting a time of 63.14 seconds in the top-three final, the Mackraft hull boat held off a determined Bevan Linklater and Malcolm Ward from Wanganui.

Having to settle for second, their consistency has seen them shoot to the lead in the point standings. Third for the day and returning to previous top-tier form were Whangamata’s Ray and Brett Thompson.

With little time to repair before the next championship round in three weeks time at South Auckland’s Meremere sprint bowl, several crews are also taking part in Friday 11 February’s Nitro Circus day at the Wanganui Shelterview track.