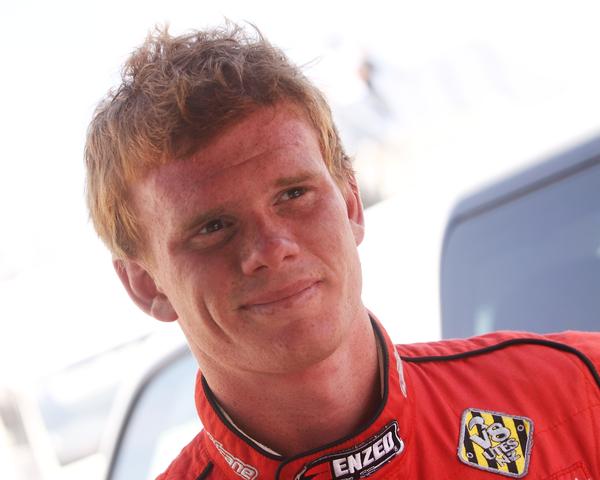 Following another strong weekend Caine Lobb heads to the penultimate round of the ENZED V8 Ute CHallenge at Taupo Motorsport Park in March with a sizeable lead over defending champion and second placed Chris Pither. CREDIT: Little Devil Motorsport

Yet another strong weekend for series leader Caine Lobb has him maintaining his position at the top of the points table with just two rounds remaining in the ENZED V8 Ute Challenge.

Coming away from three very trying races at the Manfeild Circuit in Feilding over the weekend Lobb holds a lead of 74 points to Palmerston North's Chris Pither who was able to consolidate his local knowledge of the track to finish ahead of the Northlander and move ahead of Christchurch's Simon Beirne into second place in the standings.

Nevertheless driving the Mark Cromie Holden ute a defiant Lobb placed fifth, third and second in the three races claiming second place overall for the weekend and a fistful of points.

Unfortunately for Lobb he was unable to match the pace of Pither on the twisty Manawatu circuit but using his experience and superb racecraft he was able to come through with high points and the runner up spot to maintain the sizeable points buffer before the next round at Taupo in March.

The weekend's marble draw put Lobb onto the back of the start grid for the first race of the weekend. He was able to move up through the field however crossing the line in sixth place which was later credited to him as fifth after a penalty was imposed on a driver for making contact with him.

"I was heading for a fourth place but another driver squeezed me out in the last corner so I lost that position plus another one. It wasn't like him to do that but I wasn't having a bar of it. I lodged an enquiry into the incident which was successful and I managed to get one of the places back putting me in fifth." said Lobb.

In the second race of the weekend Lobb started on pole position but his lead was quickly eaten up by defending champion Pither and then second in the standings Simon Beirne in their Ford utes.

After the first round of the series at Pukekohe in November 2010 the Holdens were fitted with a restrictor to limit the airflow cutting back on engine performance which has seen them struggle on the tighter circuits against their counterparts.

In the final race of the weekend Lobb started in third behind Pither on pole and Beirne lined up in second. After Beirne suffered a puncture Lobb moved into second place behind Pither. A safety car period was called for in the latter stages of the race where Lobb was looking for an opportunity to get around Pither at the restart. The Palmerston North local was able to hold Lobb behind him controlling the pace for other drivers to catch up to the duelling pair.

"I was trying to get past him but Chris was playing around trying to give someone the opportunity to get between me and him to help him close the points gap on me. He was able to slow me down so the others were all over me. Bit cheeky of him but I held onto second place and we finished the weekend second overall." said Lobb.

The next round for the ENZED V8 Ute Challenge is at Taupo Motorsport Park over 11-13th March.

The final round of the series is held 15-17 April at the country's largest and most popular motorsport event the ITM400 Hamilton Streetrace featuring the Australian V8 Supercars and New Zealand's own BNT V8s.