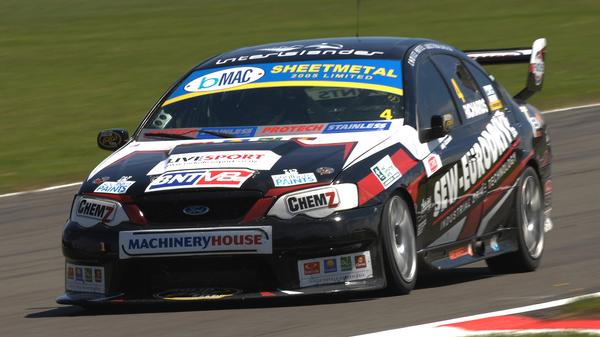 "We're still in touch with the top 10 so we just need to keep pushing hard" says Simon Richards CREDIT: SportProMedia

BNT V8s driver Simon Richards remains poised to enter the group of top 10 drivers and achieving the team's goal for the 2010-11 season after a strong showing at the Manfeild Circuit over the weekend.

Displaying good pace on race day Richards banked valuable points after finishing 10th and then 11th in the opening two contests on Sunday.

After the weekend Richards moves up to 12th in the BNT V8s Championship where he sits equal with Nick Ross. He sits just 20 points outside of the top 10 pack and achieving the Ballistic Motorsport Team's target of finishing the season inside the group.

The Hamilton driver showed he was on the pace early on when in race one he moved up from 14th on the start grid up into 10th place securing some valuable points towards his rise in the championship standings.

Although Richards was looking for a higher qualification position and is always looking to a top 10 start to boost his race potential, he was one of many drivers who were caught out when the session was stopped prematurely only halfway through.

William Bamber had a serious crash at turn one causing damage to the car and safety wall which initially brought out the red flag and then the session was halted altogether by race officials.

In that opening race of the weekend Richards in the SEW Eurodrive Ford battled hard with Holden drivers Nick Ross and Andrew Anderson crossing the line in 10th place between the two.

"That race with Nick and Andrew was pretty good and we were all right into it." said Richards.

In the second race Richards left his race one combatants Ross and Anderson behind and took the chequered flag for 11th place ahead of Martin Short, Eddie Bell and Paul Manuell to claim more points in aid of achieving his target.

Richards 100 percent race finish statistic for this season nearly came to a halt in the final race of the day when a mechanical issue arose. Fortunately he was able to nurse the car to the end of the race and over the finish line clocking more points towards his campaign.

"We threw a belt and had no water pump. I was able to finish but was a lap down, it could have been a lot worse we got some points but would have liked more." he said.

"We had good results in the first two races although I was a bit disappointed with the last one of course. But we're still in touch with the top 10 so we just need to keep pushing hard. It's only 20 points to get there so we just need to peg that back in the next two rounds" said Richards.

This season the meeting at the ITM 400 in Hamilton has become a championship round so that will be the series' final. That too will no doubt be completely awash with action as the BNT V8s compete alongside their colleagues in the V8 Supercars and in front of the huge crowd the event draws.

The ITM 400 Hamilton Streetrace takes place over the weekend of 15-17th April.