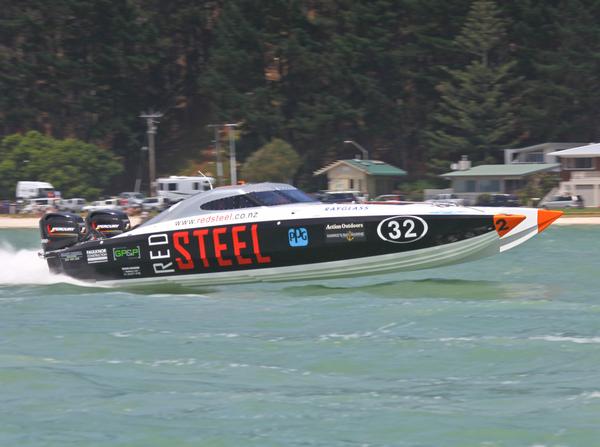 "Red Steel' will be keen to get a win on their home territory CREDIT: Cathy Vercoe 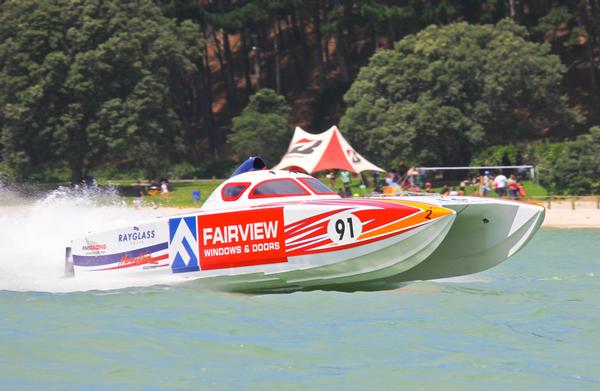 'Fairview' will be looking for more winning points at Napier. CREDIT: Cathy Vercoe

Napier has always been an exciting stopover for the Rayglass New Zealand Offshore Powerboat Series as the boats must contend with true ocean swells. The water of the Pacific Ocean does not always live up to it's name, and with vivid memories of last years huge thundering sea, the crews will be hoping for a more peaceful ride in this years race.

Many will be keen to see Napier locals Tony Carson and Brook Faulkner in 'Red Steel' competing in the 100 mile race. The team have returned faster this season, and this could be their week, as their local knowledge, and extra waterline length could give them the edge they need to win on their home turf. At Maraetai 'Red Steel' and 'NZ Blokes' dueled closely for the entire length of the race with the lead swapping between the boats, so if their last race is anything to go by, the Napier crowds will be enthralled with the close battle that is sure to develop and may be able to celebrate a local win.

The last race at Maraetai allowed some of the teams to confirm the leadership in their class, with hat tricks for 'Konica Minolta' in the Classics, 'Auckland District Collections' in the Sports Restricted class, 'Auckland District Collection 2' (Yes there are two boats running for this sponsor) winning the Honda Class for the third time, and 'NZ Blokes' who continue to win the close fought battles in the Superboat Lites.

At the halfway point of the season, 'Doosan' who won convincingly at Maraetai after leading from the start, need to cement their return to form. The ever present challenge from 'Fairview' who lead the class after winning the first two races and 'Schick Hydro' who, despite a series of engine problems has proved their speed in the past means there is no room for error. All three boats look capable of winning, and each team is acutely aware that one breakdown at this stage of the season could seriously skew the points in favour of another boat.

The Honda Class will no doubt continue to provide plenty of excitement as they compete in the 60 mile race. With 'Auckland District Collections 2' out in front, a battle is developing between James Taylor in 'Total Oil' and Mikey Smith in 'Rayglass' with only 19 points separating the two boats.

Long range forecasts suggest an onshore breeze of 13 knots is expected, and that the weather should be relatively calm compared with the pouring rain and stormy conditions of last year. Unlike the 4 metre swell from 2010, the wave height is predicted to be just under a metre with an 11 second interval between waves, which should provide plenty of fast and spectacular racing.

The NZ Offshore Powerboat Association hold a family oriented event and are happy to talk to anyone who has questions about the boats and the way they are raced. The boats will be on display both before and after the race and it's free to wander around the "pit" area, and to watch the race from the foreshore or other vantage points .

The Napier Offshore Powerboat event will provide plenty of excitement for the people of Napier and the public are encouraged to come down to the marina to see the boats, and to find a place on the waterfront to watch the racing.

The race can be viewed best from the foreshore at Perfume Point and along the Napier Waterfront. The race usually takes one hour and starts at 1.00pm.

The NZOPA would like to thank the Napier Sailing Club, Energizer, AB Marine, Marine Paramedical Services, Hawkes Bay Wine Country and Red Steel for their support in making the Napier Race possible.