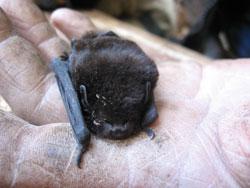 'Safe havens' for threatened native bats to be trialed in Hamilton

“Months of work has gone into the design of these bat roosting boxes, as well as research to identify the best locations for them,” said Environment Waikato biodiversity officer, Ben Paris.

“Destruction of habitat is one of the leading threats to the species. These artificial roosts might be one way to help long-tailed bats in areas where their native habitat has already been reduced.”

Arborists will install the three boxes in trees in Hammond Park on Thursday morning. Bat detection devices, imported last year from Britain to convert the sonar signal the bats send out into a sound audible to humans, will be used to monitor use of the boxes.

Meanwhile, the community can also help the conservation project by borrowing the sonar devices, free-of-charge.

“People who think they might have bats on or near their sections can arrange to borrow one of the sonar devices from the regional council,” he said.

“Last year we had a good response from residents wanting to try out the sonar devices. Bats are more active in the warmer, summer months so we are hoping there will be renewed interest in helping us to track where the bats are in the city.”

Bat sightings can be reported by contacting Environment Waikato or completing a form available online at www.ew.govt.nz/projectecho.

“Environment Waikato is collecting information on where long-tailed bats are roosting which helps us to better protect the species and potentially grow the numbers in Hamilton,” Mr Paris said.

“Long-tailed bats live in small cavities in old or large trees and destruction of habitat is one of the biggest threats to the species. Landowners who suspect they might have bats present on their properties can borrow the equipment before removing any large or dead trees.”

While the numbers are uncertain, they have been detected in Hammond Bush, Riverlea, as well as the Hamilton Gardens, Hamilton Cemetery and Sandford Park.

Weighing up to 14g and with a wing span of about 250mm, this country’s native land mammal is preyed upon by rats, cats, stoats and moreporks. Long-tailed bats (pekapeka) feed on flying insects like moths, midges and mosquitoes.

People interested in borrowing the equipment should contact Ben Paris at Environment Waikato on 0800 800 401. More information on Project Echo is available online at www.ew.govt.nz/projectecho.