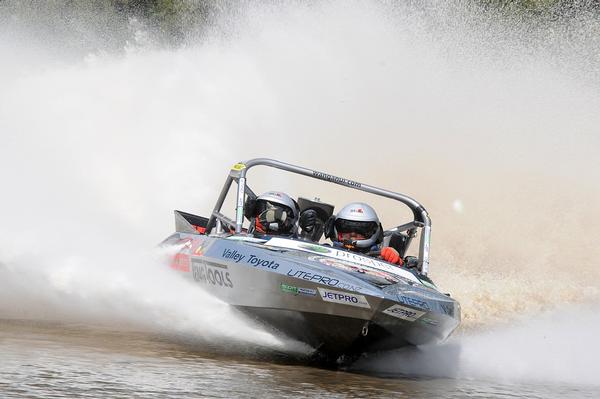 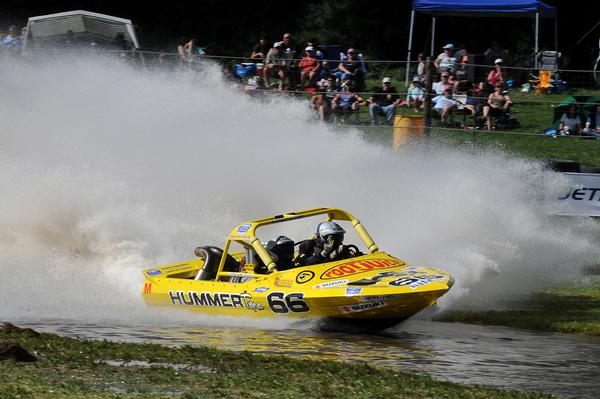 Wanganui’s Leighton and Kellie Minnell set fastest time at today’s fourth round of the Jetpro Jetsprint championship held at Crownthorpe near Hastings, to take the lead in the Suzuki Superboat category.

Scorching weather conditions at the spring-fed lagoon location, Minnell was among a select few who managed to navigate the slightly altered course and take victory in the water jet propelled sprint boat series. Amidst the errors that cut many from the elimination style competition, several found contact with land during their steering of the water course.

“It was a hard day in the office; a hard result but a good result for us because we needed it to get one hand on the mug as such,” said Minnell of taking a narrow lead in the best of five round series.

“Bit of shame series leader Duncan Wilson’s boat broke down, but double driving with Brent White got him to fourth at least and keeps the series alive.”

“Certainly the change to the track with the hair-pin was really hard. It certainly was a tricky one, especially coming back through the second time – so it really mixed things up for everyone and I believe pulled back any horsepower advantage some may have had.”

“Kudos to Paddy Dillon, he had a wonderful day to keep us right up there in the Suzuki Superboat category, so he’s really got the big Ford engine going well.”

Third, Rotorua’s Nick and Richelle Berryman, rounded out the trio in the top-three shoot-out.

A reverse of current lacking form rewarded defending Scott Waterjet Group A championship team Bevin Muir and Kathy Barker. They took their first win of the season with a 52 second time to start the long climb from seventh in the standings. Following the Thames based Muir team in the day’s results, Hamilton’s Sam Newdick and navigator Nic McIndoe had to swallow what had been a leading form to finish a close second. Third, Taupo’s Reg and Julie Smith weren’t disappointed with their result, inching them further ahead in the overall standings with two rounds to contest.

Entry level category Jetpro Lites also delivered championship excitement, with series dominator’s Bevan Linklater and Malcolm Ward outside the top-three for the first time this season. Instead it was Ray and Brent Thompson from Whangamata who set fastest time with a 60.23 in the final run, heading New Plymouth’s Graeme and Scott Jones. Pace setters for the day, Upper Hutt’s Craig Shaw and Shaun Harris struck ground briefly in the final run – setting a time of 68.25 to finish third.

The series fifth and penultimate round for the 2011 title moves back to Wanganui on 2 April. Adding diversity to the championship, the Saturday event will be held under lights at the Shelterview Raceway, eight kilometres north-east of Wanganui.