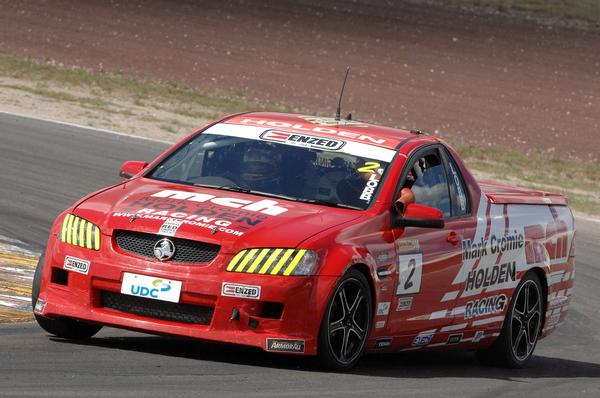 Yet another strong weekend of racing rewarded series leader Caine Lobb and the Mark Cromie Holden team with great results and a comfortable buffer before the final round of the ENZED V8 Ute Challenge in Hamilton next month.

Although struggling for pace against the Fords around the tight and technical track at Taupo, Lobb drove the Mark Cromie Holden to third in the opening race and improved on that with second place in both the second and third races of the weekend.

Main contender and defending champion Queensland based Chris Pither made it very difficult for Whangarei's Caine Lobb over the weekend as he aimed to close the gap in the series where he was 74 points adrift entering the round. Pushing hard and winning the opening race ahead of Lobb he then went too far in the second race by making contact with the Whangarei driver which resulted in him being awarded a drive through penalty.

The penalty left Lobb free to move through the pack and pursue the leader Andrew Waite eventually crossing the line in second place with Pither in 11th.

"It was a good race, I started ninth and finished second. Chris gave me a bit of a tap and sent me sideways. He's been tapping me all season without any consequence so I was actually quite pleased when this time he was given a penalty and it has helped me keep a good lead before heading to Christchurch." said Lobb.

In the final race of the weekend Lobb started from pole with Pither managing to get past him and into the lead. A safety car period offered an opportunity which Lobb was able to take full advantage of.

"I pipped Chris at the restart, I caught him sleeping but he eventually got past me again when I was unable to block him any longer." he said.

After the Taupo round Lobb now holds a good sized lead of 71 points with just three races remaining which will be at the ITM400 in Hamilton over the weekend of April 15-17 where they will be joined by the BNT V8s and the Australian V8 Supercars at the illustrious event.

Lobb has won three rounds from six so far this season.

The final round in April promises to be very exciting where the V8 utes will be racing inside the concrete walls of the Hamilton street circuit and in front of the huge crowds the event attracts of over 100,000 across the three days of motorsport action.