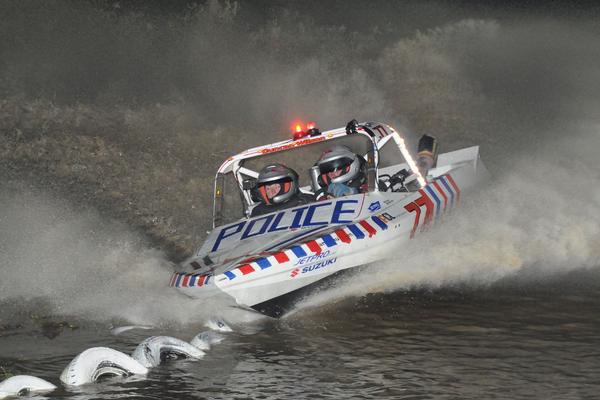 New leaders in the Suzuki Superboat category after Saturday night's fifth and penultimate round of the Jetpro Jetsprint championship round held near Wanganui are Duncan Wilson and navigator Jamiee-Lee Lupton. CREDIT: Ian Thornton

Picture perfect calm conditions made Saturday night’s running of the Jetpro Jetsprint Championship at Wanganui a double-fold spectator festival as the fifth round of the series illuminated those most likely to be the 2011 champions.

Typically a scene for up-sets with many finding the under-lights event too much of a challenge, the majority of competitors steered a clear course despite the championship points pressures.

Taking overall honours with fastest time of the evening in the Suzuki Superboat category, Wanganui’s Duncan Wilson and navigator Jamiee-Lee Lupton brought the biggest applause when they set a 49.46 second run around the multi-configuration course. Looking like a head-to-head battle with series leader Leighton and Kellie Minnell of Wanganui, fate intervened in the top-five elimination run when the steering column collapsed at the exit of the final series of turns. Minnell had to wrestle the remains to steer the boat at cruising speed through the finish line and in to fourth position for the evening. That result elevated Wilson to the series lead heading in to the final round.

“The boat handled well – and it worked out for us,” said a relieved Wilson. “I didn’t think we’d get down to the 49’s being in the dark and we had a few muck-up’s in the final run so it was an extra good result.”

“It is hard though – really hard and a lot of that depends on the rotation set for the event. I’ve been so close – you have good days and bad days – today was a good one!”

Also taking charge, Thames based Bevin Muir and navigator Kathy Barker took a comfortable win in the Scott Waterjet Group A category after laying down a 51.67 second run in the top-three final run off. Pressure from all quarters saw the top-three final run between Muir, Wanganui’s Richard Murray and Kesty Manning with Taupo’s Reg and Julie Smith relieved to secure third and the category title after fearless attempts at navigating the open flowing course.

“It looks like we won the battle but Reg has won the war and good on him – he deserves it,” said Muir in consolation of Smith’s insurmountable points lead in the Scott Waterjet Group A category. “He’s battled hard over the years. We worked out all the scenarios during the week and I’ve got a habit of finishing well – too late in the season. That’s what I’ve got to work on next year.”

Wanganui’s Bevan Linklater and navigator Malcolm Ward are seemingly certain for championship victory in the Jetpro Lites category, finishing second after being the pace setter for most of the evening. Instead it was Denis and Steve Crene from Whangarei who took their second win in their rookie season with a time of 56.18 seconds.

“It’s been awesome here today; a bit different driving at night but good to come back for a win – magic. A little bit scary out there with the moisture flying round too. Going up that last straight you go through a cloud of your own wake and your eyes fog up,” said Crene,

While an upset came early in the evening with Hamilton’s Sam Newdick crashing heavily in the final qualifying run, his early times had him heading for another podium finish in the Scott Waterjet Group A class. Clipping the bank at the exit of a long corner, Newdick rolled and landed heavily, eliminating him from the rest of the evening.

A similar result befell Wanganui Suzuki Superboat team of Pat Dillon and Steve Edmonds, after the head gasket in their Ford 410 supercharged boat blew. Another retiring from mechanical woes; the rotary engine turbo-charged boat of Wanganui’s Peter and Gary Huijs left the water when stator vanes in their jet pump unit bound up the impellor blades.

The second time the jet sprint boat series has run under lights for the six round championship season, the lined spectator embankment added to the competition atmosphere. Teams now concentrate on carrying their success forward for the season finale in two weeks time where the 2011 winners will be decided. The series moves to the south eastern quarter: the J & S Aquatrack at Tauherinika near Featherston on 17 April.