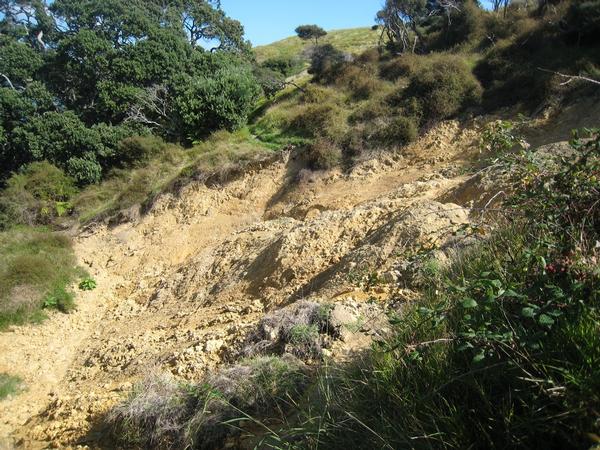 Cyclone Wilma on January 29 this year caused a considerable amount of slip damage on Waiheke Island with high profile incidents achieving immediate media attention: the Onetangi bach that slid down towards the beach and the damaged tracks during Headland Sculpture's event were both reported on.  Two months later, the island still bears multiple scars of exposed clay, after the loss of topsoil and vegetation.  Clearly, the island's popular walkways have also suffered but an alarming stand-off situation remains unresolved affecting a walking route that some may consider the premier option for visitors. The northern headland at Matiatia offers some of the best vistas up the Hauraki Gulf, available from Waiheke Island. The route is accessible within metres of the ferry wharf and provides access to quiet bays as well as the larger Owhanake Bay, in a direction eventually leading to Oneroa Village. This is a major attraction walkway for domestic and overseas visitors to Waiheke, yet the track remains in a hazardous condition due to several significant slips removing the pathway.

A recent inspection of the initial section, showed that within minutes of entering the hillside track, the unsuspecting walker is faced with two virtually impassible ravines. Two visitors were encountered in the act of vertically scaling across one divide, risking their safety: they reported several slips at the far end section, having entered the walkway from that end. They noted no warning signage was in place. Nor was there any evident at the Matiatia end.

Local Parks spokesman Gary Wilton expressed his frustration that this walkway is on DOC owned and managed land. He has been told that the issue is not high enough priority to repair or even erect signage. Gary Wilton describes the situation as an accountability tangle, in which he is unable to perform maintenance or erect signs in case his department is held responsible for any issues related to use of the walkway.

Doc spokesman Jonathan Miles has promised this morning to investigate