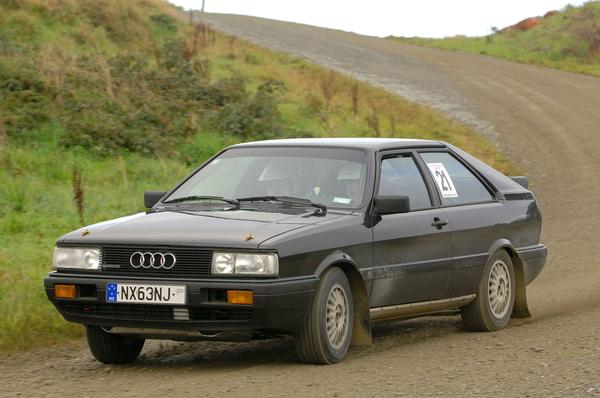 Wilson returns to NZRC competition with an Audi Quattro

This weekend’s opening round of the 2011 Brian Green Property Group New Zealand Rally Championship in Otago features the return of the revered Audi Quattro name to the historic category, one of four classes within the championship structure.

At the DriveSouth Rally of Otago, Wilson is among 42 competitors in the rally-within-a-rally in the International Classic Rally of Otago. But from a NZRC historic category perspective, Wilson competes in a ten-strong field of five Ford Escorts, a Mazda RX7, Mazda RX3, Mazda 323 and a Mitsubishi Lancer.

The fire-spitting, world-dominating Group B Audi Quattros of the early 1980s form the basis of many legendary rally successes such as the one campaigned around New Zealand by NZRC sponsor Brian Green and the late Malcolm Stewart.

Wilson says: “It’s about getting out there to have some fun and drive a car really. I’ve never completed a full New Zealand rally championship, even back when we were running the Toyota Starlet. We did championship rallies in the Mazda but it’s been at least 20 years since I last competed in a championship round. Since, I’ve been building and testing cars, but nothing actually competitive.”

Wilson is joined by Christchurch’s Mike Fletcher as co-driver in the Audi. Fletcher is another long-serving competitor and navigated for Stewart in his Audi so returns to a car and crew he knows well.

“The car has been built and prepared by Timo Lloyd and Malcolm Stewart’s service crew from Dannevirke and is actually owned by Sue Stewart, Malcolm’s wife. I’m just the driver,” says Wilson. “It’s brand new this year and has absolutely no previous competition history with any other driver. It’s a five cylinder Audi Quattro so it sounds awesome! It’s normally-aspirated, so relatively it’s quite slow, also because it’s a solid car and quite heavy.

“When Sue started thinking about this project we happened to look on TradeMe and there was this car a guy was selling, a left-hand drive, which suited perfectly. The objective is to make it as reliable as possible; it’s nowhere near a Group B car; the only similarity is the name and body shape, less the flared guards and turbo-charger. It’s what you’d call a Group N (production specification) of that era.

“The primary goal is fun; the secondary goal is to finish the events and the third goal is to make people more aware of the fact there are some old historic four-wheel-drive cars that could be out there in the championship.”

Since its completion, the car has run in two events, with Wilson and Fletcher having their first run together at the recent Westland rally. “So it’s had a reasonable shake-down.”

“It’s also a major highlight for rally fans that 1981 world rally champion Ari Vatanen is contesting the Otago classic rally,” says Johnston. “We have the opportunity to enjoy some truly world-class rallying right here at home in the opening round of the New Zealand Rally Championship.”

After Otago, the NZRC continues with Rally New Zealand based at Hampton Downs on 7 and 8 May, Rally Wairarapa on 28 to 29 May, the International Rally of Whangarei on 16 to 17 July and Rally Hawke’s Bay from 20 to 21 August.

A new-look NZRC website is now live – www.nzrallychampionship.co.nz – and fans can also find out more information about any of the events on the New Zealand Rally Championship Facebook page.
ENDS/